Edit: I came across this while reading
Topological phases: Classification of topological insulators and superconductors of non-interacting fermions, and beyond - A. Ludwig.
Rest of the part of the paper is irrelevant for this question. Here the author calls $H_{A,B}$ to be the 1st quantized Hamiltonian. 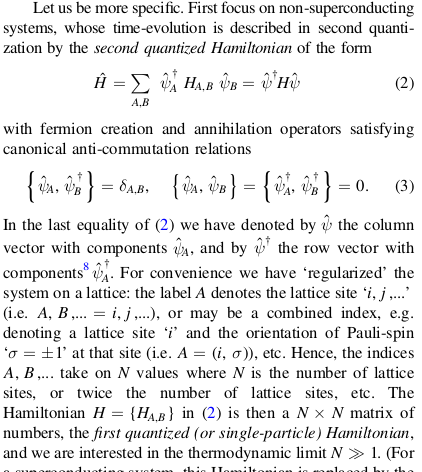 I believe it is useful to review what is meant by first quantization and second quantization. These are historical terms and may not be the best according to current views, since they refer simply to quantization prescriptions in different settings.

First quantization just deals with the quantization of 1-particle. So such theory, you can think about a harmonic oscillator (always :) ), where we transform its traditional Hamiltonian written in terms of $\hat{P}$, together with its quadratic potential into something that is proportional to $$\hat{H} \propto \sum_{n}\omega_n \hat{a}^\dagger\hat{a}$$ where the $a$'s are the creation and annihilation operators and their role is to diagonalize the Hamiltonian. They must fulfill canonical commutation relations (CCR), to preserve the commutation relation between $\hat{p}$ and $\hat{x}$, this is the quantization part. All in all the important point here is that there is only one particle to be treated and it can occupy a discrete/continuous set of energy levels. So a state is just labelled by one number for example $|n\rangle $ and applying $\hat{a}^\dagger$ will take this state to $|n+1\rangle$ which has a higher energy, $\omega_{n+1}$, that is why they are also called rising/lowering operators sometimes.

Second quantization refers to a theory of fields usually, which attempt to model multi-particle systems. To specify a state in this theory you could think about writing down its current energy-level occupation. You would need to say how many particles and of which type are at each level. I won't go through the details, but the point is you need a pair of annihilation and creation operators per field type (in the simplest example) and these also acquire a momentum label. So the meaning of the $a$'s has changed, instead of raising the energy as in 1st quantization, they add a particle of the same energy. So even considering just one field, i.e. one particle type, the Hamiltonian would be roughly $$\hat{H}\propto \int {\rm d}p\, w_p\, \hat{a}^\dagger_p \hat{a}_p $$ and a state is normally written in terms creation operators acting on the vacuum $|0\rangle$ as for example: $$ \hat{a}^{\dagger\,n_1}_{p_1}\hat{a}^{\dagger\,n_2}_{p_2}\cdots\hat{a}^{\dagger\,n_m}_{p_m}|0\rangle$$ this represents a state simultaneously carrying $n_i$ particles carrying momentum $p_i$ for $i=1,2,...,m$.

Like ohneVal clearly mentioned in his answer that there is no such thing called a direct correspondence between first and second quantization. Hence, to add further, in your expression : $$\hat{H} = \sum \psi_i^{\dagger}H_{ij}\psi_j$$ we have already established that we are taking fields (or wavefunctions) as operators, which is to say, we are using the second quantized form. Here your Hamiltonian is written in the basis of these field operators $\psi_i$ which then acts on vacuum state to give you corresponding expression.

Remember, second quantization is just a convenient tool to deal with many-particle systems, because in the end we just care about the number of particles in available states.

I think, the problem has to be seen in a wider context. Usualy one speaks about the quantum mechanics in the configuration space as described by a Hamilton operator containing Coulomb terms omitting self-interaction. This historically was taken over from an approximation of the classical theory of point-like charges. The classical electromagnetic theory of point-like charges however is well-known to be ill. One has to eliminate by hand the self-interaction in the Lorentz force. The old e.m. textbooks between the two world wars explained in detals all the absurdities of this classical theory. Already the term Hamiltonian, or Lagrangian is meaningless there. On this way quantum mechanics risked a dead end. The only meaningfull construction is to ignore the image of point-like particles and adopt a field theoretical formulation, followed by the quantization of the fields describing the particles and photons. This leads directly to the QED. Depending, wether one describes the particles as fields satisfying the Dirac equation fields satisfying the Schrödinger equation one arrives to the relativistic or non-relativistic QED. There is no place at all for a "configuration space" description.

I can recommend a recent pedagogical arXiv preprint on this subject, intended as a chapter of a book in preparation.

Not the answer you're looking for? Browse other questions tagged quantum-mechanics quantum-field-theory hamiltonian second-quantization or ask your own question.