I'm reading this physics book, and in it contains this problem. Quoted:

An airplane is flying at Mach 1.75 at an altitude of 8000 m, where the speed of sound is 320 m/s. How long after the plane passes directly overhead will you hear the sonic boom?

Considering the shock wave is moving at the same speed as the plane, we can simply use some trigonometry to deduce that

$$\tan\alpha=\frac{8000 m}{560 m/s * t}$$ so $t$ can be calculated to be 20.5 seconds. This is the solution given by the book. My question is, doesn't the shock wave have to take time to appear? Like, from the moment the shock is created it must take time until it reaches the ground? My hypothesis stems from the idea of taking the limit of the Mach number to 1. Then, the plane velocity approaches 320 m/s, and the angle approaches 90 degrees. Plugging in these limits to the final equation yield:

My question is, doesn't the shock wave have to take time to appear? Like, from the moment the shock is created it must take time until it reaches the ground?

Of course. The cone is the geometric realization of this. The shock is created by the surfaces of the airplane disturbing the air. The sound of this event then moves outward at the speed of sound in the air.

The surface of the cone represents the motion of this shock wave through the air. The portions near the vertex of the cone were created most recently. The portions farther away are older and have traveled away from where the plane was. But assuming the speeds remain constant, the shape of the surface also is constant and we can imagine it moving forward at the same speed as the plane.

But this cone is not a physical object. It's not really moving forward.

How can the shock wave created by the plane reach the ground in no time at all?

It can't. Even in the first case that doesn't happen. It takes $(8000\text{m}/(320\text{m/s}))$ or $25\text{s}$ for the generated sound to reach the ground. But you can hear sounds from the plane that were created before it flew overhead. Above mach 1, the plane will always pass you before any previously-generated sound can reach you. Below mach 1, some earlier sounds can "beat" the plane to reach you first.

The time it takes is certainly not zero, that would violate the speed of sound, among other things.

To solve your problem, the easiest thing to do is assume that the speed of sound is approximately constant in all your air medium. So that you can use the Mach cone. Considering this, and assuming that the airplane has been flying at constant velocity for some time before reaching over your head, the initial condition looks like this: 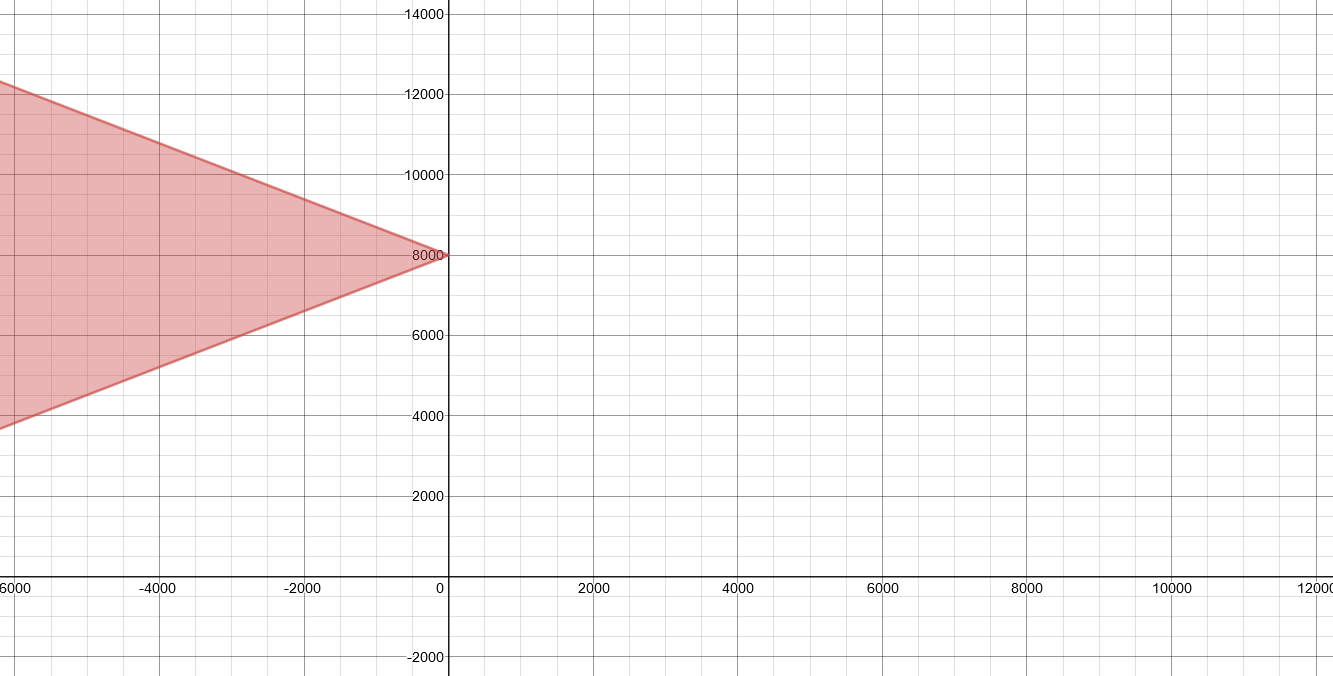 The shaded red region is the Mach cone of the airplane, and you are located at the origin $(0, 0)$. What the question is asking can be rephrased as "how much time does it take for the Mach cone to reach you?". If the velocity and altitude of the airplane remains constant, this would look like this: 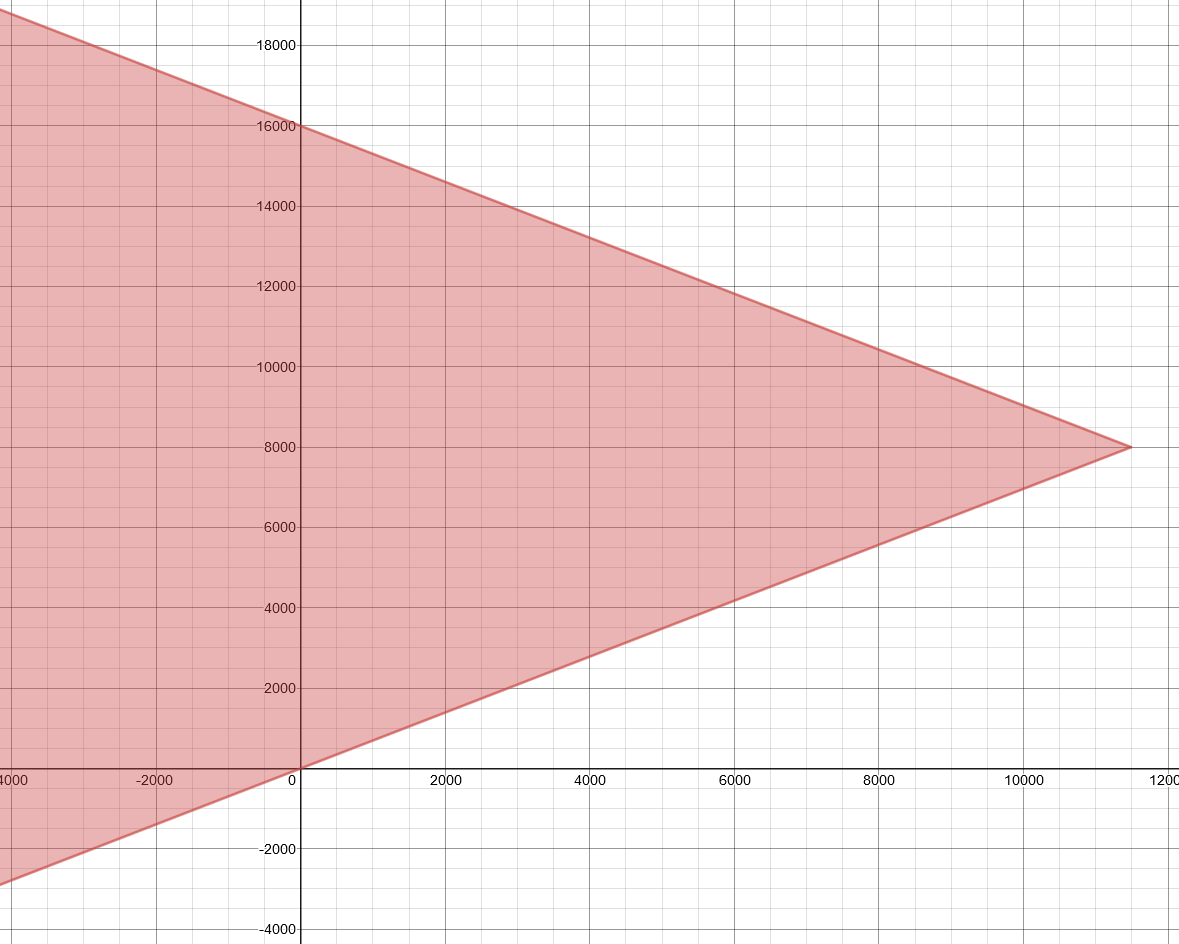 The airplane is on the tip of the cone, so you know the distance it traveled, and you also know the speed.

With this you should be able to calculate the time fairly easily.

Consider a situation where the aircraft is traveling at a subsonic speed, below the speed of sound. In that scenario, the sound waves from the aircraft will reach you before it flies overhead (as they are traveling faster than the aircraft). In this case, the $t$ in your equation will be negative.

So, given that t is positive for an aircraft traveling at $M > 1$ and negative for $M < 1$, it stands to reason that there must be a speed of the aircraft at which the sound waves reach you at the same time as it flies overhead, in which case $t = 0$.

It is true that, in theory, when the aircraft is traveling at $M = 1$, the shock will be a flat plane coincident with the nosecone of the aircraft; however, bear in mind that the sound waves that are reaching the ground in that situation will have left the aircraft some time before that. The shock front is moving with the aircraft, but that doesn't mean the sounds waves have traveled instantaneously. Remember, sound waves travel perpendicular to the shock, not along it.

You are ignoring the fact that the shock wave dissipates as it spreads further from the plane, and its initial strength close to the plane is greater as the Mach number increases.

So in real life, the very weak shock from a plane flying at say Mach 1.001 would not propagate very far, and if the plane was at 8000m it would not be heard at all on the ground.

Close to the plane, the shock wave at Mach 1.001 would indeed be almost vertical.

The question assumes that the shock at Mach 1.75 is strong enough to reach the ground and be heard. In fact, the shocks from military fast jets flying at high altitude are unlikely to be heard at all on the ground, unless you are in a quiet situation and know what they sound like so you recognise the characteristic "double shock" when you hear it. Of course the shocks from bigger planes, like Concorde, were more powerful and caused a ban on supersonic flight over land.

Not the answer you're looking for? Browse other questions tagged homework-and-exercises classical-mechanics shock-waves or ask your own question.

5
Imaginary angle on simple centrifugal problem
3
Block Sliding Down a Plane (Perpendicular Velocity)
4
Shock-waves, Bangs and the Speed of Sound
0
Determining the velocity function for a particle on a rough inclined plane
30
How can shock waves travel faster than sound?
2
Oscillating piston shock waves
3
Physical reasoning behind hearing a single shock
2
What's the difference between shock waves and acoustic waves?