What happens when one side of a convex lens is made fully reflecting?

Assume that I have got a bowl half-filled with mercury. In this bowl, I place a convex lens which make one side of the lens fully reflecting. What will happen to the lens, will it behave like a concave mirror and what will be the change in the sign of the focal length??

It will behave as a concave mirror with a convex lens in front of it, or just as a convex mirror if the other side is reflecting (with a lens behind it that doesn't really do anything because it's blocked). You would have to do ray tracing to see more precise behavior for the former case.

As others have pointed out, it will behave as a lens and a mirror. I wanted to point out a particular version of this with interesting applications: the cat's eye retroreflector: 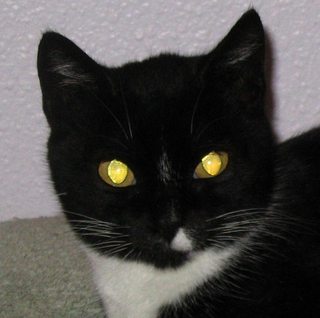 The cat's eye retroreflector is a transparent sphere that is silvered on one side, much like the eye of a cat with its reflective tapetum lucidum at the back. This structure has the curious property that it always reflects light directly back at the source. This makes it "light up" if you hit it with a flash light or headlight. This of course, leads to its use on roads 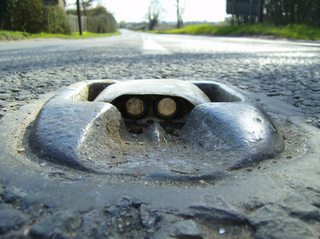 Not all lenses mirrored on one side will have this precise effect, but I think it's pretty awesome!

Yes. Convex mirrors are typically made by depositing a metal coating on the curved surface of a convex piece of glass. But the focal lengths are incomparable.

As other answers have pointed out, if one surface of the lens is made reflective by for instance coating it with a thin reflective film, for light incident from the coated side it will behave as a convex mirror, and for light incident from the other side it will behave as a concave mirror. Assuming the lens is sufficiently thin, we can also calculate how "concave" this mirror is, i.e. what the effective focal length is.

Edit: My above statement that the lens behaves as a concave mirror for light incident from the non-coated side assumes that the lens is biconvex. For a concavo-convex lens, depending on the radii of curvature and the refractive index of the lens, it can also behave as a planar or a convex mirror. If for instance $R_1 < 0$, $R_2 > 0$ and $R_2 < -R_1 < (n-1)R_2$, the lens by itself is still converging but the lens-mirror system behaves as a convex mirror.

Not the answer you're looking for? Browse other questions tagged optics reflection lenses or ask your own question.

7
Optics Paradox?
1
Optics biconvex and plano convex
1
What is the actual significance of the focal point of a lens?
1
Does the position of the final image in a multiple lens system found by the thin lens formula always agree with the ray diagrams?
3
What are the differences between Convex Lens and Convex Mirrors?
0
Sign convention in optic problems
5
Which side is convex in my plano convex lens?
0
The sides of a spoon as concave/convex mirrors