At the Fundamental Level, are Radio Waves and Visible Light Produced in the Same Way?

To approach this I've decided to start with the fundamentals, such as "What is Radiation?". The trouble I'm having is with connecting how visible light and radio waves are produced. I know that visible light (and frequencies around visible light) is produced when an electron in an excited atom drops down an energy level or two, releasing energy in the form of a photon. But I also know that radio waves are produced from an antenna by accelerating electrons using an alternating current (I think).

In short, my question is, are both types of EM wave produced differently, or does it just appear that way? And if they are produced in the same way, what's the connection between electrons dropping energy levels in an atom, and accelerating electrons in a wire?

Or perhaps if it makes the question clearer, are radio waves from an antenna produced in the same way light from a light bulb is produced?

No, the light from an incandescent bulb is produced by heating the filament until its very hot. Then it emits radiation like the black-body radiation for any object. But all light is produced by accelerating a charged particle. So visible light and radio waves are the same except for the frequency and wavelength of the waves.

You may have learned about the Bohr atom at some point. The Bohr atom assumed electrons were orbiting a nucleus. But an orbit is not time-independent and the electron is accelerated. The Bohr model of an atom is wrong, but some ideas of the Bohr atom were correct in way. Quantum mechanics shows that the electrons are not orbiting a nucleus but instead are in a time-independent clump near the nucleus. It is when an electron changes its orbit, or when the "clump" changes shape and position that the electron is accelerated.

The energy level of an atom is time-independent. But when a change in energy levels occur, the electron associated with this change is accelerated. This is like the antenna in the sense that electrons are being accelerated and electromagnetic radiation is produced.

Electrons are free to be accelerated in conductors (like metals) and this is how antennas work, the acc'n rates are slow for the electronics producing Khz,Mhz and Ghz EM waves. Many electrons are given lower energy but each electron could be said to generate a photon. It takes an antenna to receive many of the photons in superposition to get a signal. A visible photon has higher energy produced by one atom/electron and its acceleration is at the atomic level, these are short wavelength. Harm to humans is typically estimated from the total energy, i.e. # photons x wavelength. Also know that single UV, X-ray, gamma photons are harmful. Microwaves are another immortal example where power has to be carefully managed.

A recent report describes "nano-antennas" on the scale of light waves. 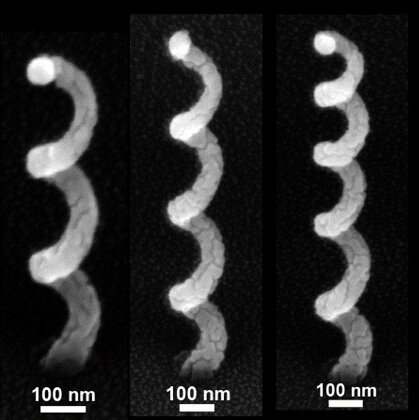 These don't seem to actually "produce" light but

The nano corkscrews are highly sensitive to light: depending on frequency and polarisation, they can strongly enhance it. Because helical antennas have a handedness, they can select light quanta according to their handedness, i.e. their spin.

In the summer evenings on the 80 meter band I can listen to thunder (aka electrical) storms that can be 100s or a thousand and more miles away. The lightning strike produces three kinds of radiation: Light, Radio Waves, and Sound. Those close to the lightning hear the thunder -- that is, sound. Those further away if they are looking at precisely the right moment can see the light of the lightning strike. And, ham radio operators like myself can be thousands of miles away and hear (and, then often complain) of the QRN (atmospheric noise) created by such distant electrical storms.

Therefore, one event, three kinds of radiation although I do know you did not care too much about "sound" radiation. By the way, the 80 meter amateur radio band in the US is 3.5 to 4.0 MHz in frequency -- the low end of the HF spectrum.

Another way is that I once built a crystal controlled transmitter where the crystal (a tuned piece of rock as some would say) generated an oscillating voltage at 7.15 MHz via piezoelectric phenomena (google that). This oscillating voltage is refined in an oscillator electronic circuit and then amplified and transmitted as electromagnetic waves via the antenna. This method produces only radio waves, no light is generated, no sound is generated.

I could go on with lots of other examples.

Not the answer you're looking for? Browse other questions tagged quantum-mechanics visible-light waves electromagnetic-radiation or ask your own question.

1
Florescents and radio waves
6
What is beyond gamma rays and radio waves in the electromagnetic spectrum?
2
Can a compound optically active in visible light also show optical activity in radio waves region?
35
Is the light from the Sun the same as the light from a bulb?
1
Can the equation $E = h\nu$ be used not only for light, but for radio waves? (Since they are all part of the electromagnetic spectrum)
1
Radio Waves / Light: Atmospheric Refraction
6
Action-reaction pairs with electromagnetic waves
1
Why do artificial transmissions of coherent EM waves tend to be isotropic at radio frequencies but directional at visible frequencies?