I'm a Software Developer by profession and my physics knowledge is limited what I had learned at high school level. Please excuse me if the question is trivial.

From what I know, a sound wave is set of different amplitudes spread across a time line. The amplitudes vary greatly. Hence, sound wave is largely aperiodic (amplitudes don't repeat often). Now, where does frequency come into picture here? If the wave is periodic like a sine wave or a deterministic mathematical function of time, then frequency can be measured as the number of cycles (wave reaching same amplitude) in one second. How can we define frequency of highly aperiodic sounds like human speech. If all that is recorded on a gramophone disc is varying amplitudes across timeline, where is frequency accounted for? Does the frequency remain constant in a typical human speech?

The sound that reaches your ear is just air pressure fluctuating over time. You can use a transducer of some sort to convert the value of air pressure to some other form - for example:

The idea that the variations in pressure over time are due to, or consist of, a collection of frequencies is just a mathematically equivalent description but it does not represent extra information, it's just a different way of describing the same information.

Here's some diagrams from a synthesizer manual 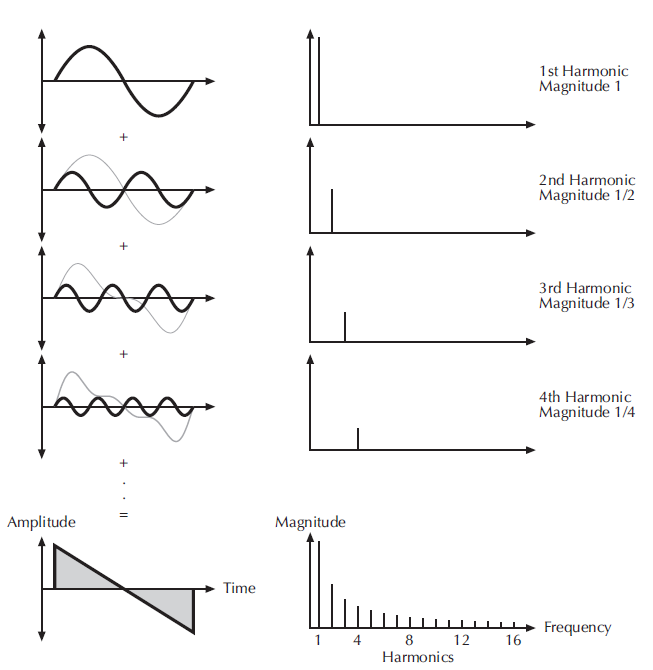 Above is shown how you can continue adding sine waves of differing frequencies to construct an arbitrary waveform (a sawtooth).

The sawtooth waverform can be recorded directly as depths in a groove on a record. But you could "record" the same thing as a set of numbers that represent the frequencies of a dozen sine waves you could add together to produce a single pressure wave that varies over time in the same way.

You can make an arbitrary sound (or any waveform) by adding together a bunch of pure tones at different frequencies. So a sound, unless it happens to be a pure tone, does not contain a single frequency component, rather a range of frequencies. The mathematics behind this is called Fourier analysis and you can see many examples on Wikipedia or by searching the web.

Your question is specifically about how the concept of frequency can be applied to aperiodic signals. Simplest example is a finite width rectangular pulse - the signal is zero outside the pulse. This is certainly aperiodic. Now for periodic signals f(t), you can, for each frequency which is a multiple of the period, compute the n'th Fourier coefficient as $$ c_n = \int^{\pi}_{-\pi}f(t)e^{-int}dt$$ This represents "how much" of frquency n is present in the periodic signal, as explained in the other answers.

So for aperiodic signals (or truncated periodic signals), this is what you want. You can calculate the Fourier transform of anything from a rectangular pulse to the latest David Bowie track.

The "frequencies" that are present in the signal are just the Fourier transformed variables $\xi$.

Not the answer you're looking for? Browse other questions tagged acoustics fourier-transform signal-processing or ask your own question.

2
Energy stored in space/frequency electric field
2
Sound of packing tape dispensation?
4
What is the physical interpretation of the Fourier transform $(\mathcal{F}Z)(t)$ an impedance?
3
What is the meaning of “frequency of a human voice”?
0
Why are waves, the means, of information transfer over long distances, excluding difusion or contact of info stored in matter
1
What does a constant signal sound like?
4
What is the significance of the Fourier coefficients?
0
Which information do we get from the phase spectrum about the wave?
0
What is a “Fourier transform limited pulse”?