The picture below is a low-effort mock-up I made showing a closed loop with uniform ambient room temperature and top-down gravity containing two species of gas—although the idea may apply equally to liquids too. The gapped rectangles ("zebra crossing") represent a molecular sieve: a filter/membrane consisting of holes large enough to allow traversal by small/light molecules (which I colored blue; e.g., helium) while blocking the passage of larger/heavier molecules (colored green; e.g., argon). 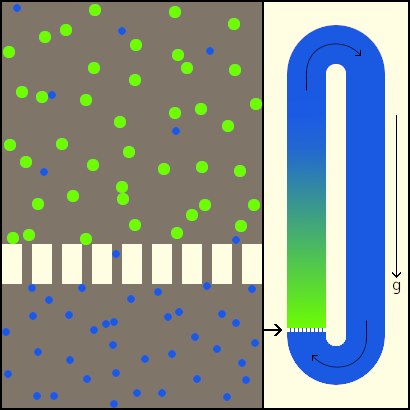 The conundrum I see here is that even though—from a macroscopic point of view—the pressure above the sieve is bound to be larger than the pressure below it; the net flow through the sieve itself should be an upward vector simply because the concentration of the blue molecules above the sieve (per volume) can be expected to be significantly lower than below it, due to its buoyancy in relation to the heavier green molecules.

If such a flow could persist —no matter how tiny—, it would have far-reaching implications. The sieve would be an embodiment of Maxwell's demon, as the system would demonstrate perpetual motion of the 2nd kind where flow and buoyancy is sustained through Brownian particle kinetics; thus causing spontaneous cooling of the environment, violating the 2nd law of (classical) thermodynamics.

Outlandish and naive of course, so please scrutinize this idea with all the skepticism it deserves? What did I overlook?

(Practically speaking, there would be significant engineering challenges involved in creating molecular sieve(s) that are defect-free with regard to not allowing any leakage of the green medium to the volume below, but techniques involving graphene oxide membranes already seem to show promising results in that area.)

This perpetual motion machine fails for the same reason that all others involving the buoyant force fail. If the green molecules really can exert a buoyant force on the blue ones, that means they exert pressure, since a buoyant force is merely a difference in pressure. And a blue ball in the sieve only feels pressure in the downward direction. This one-sided pressure means you will quickly reach an equilibrium where the concentration of blue balls is greater below the sieve than above it, and the flow stops.

Not the answer you're looking for? Browse other questions tagged thermodynamics entropy buoyancy thought-experiment perpetual-motion or ask your own question.