(Yes, I have reviewed 8 other answers to similar questions. Please bear with me.)

M is on the platform, T (aka M') is on the train with open carriages. Just as T passes M, lightening strikes two points A and B equidistant behind and ahead of both M and T.

For Thunder (not in Einstein's explanation), M will clearly hear both bangs together, and knowing the speed of sound through air and distances to A and B can calculate when the lightening struck. It will also take a little time for the sound to reach T in the middle of the train, during which T will move ahead of M. T will thus hear the front B strike first as he will now be closer to B than A, and the speed of sound is relative to the air. Clear.

For Light let us assume M will also see both flashes at the same time. Let that be the definition of the flashes being Simultaneous. But what about T?

Unlike sound, the speed of light is relative to the frame of reference of the observer. T is equidistant from A and B when the flash occurred, so T should also see both flashes together. Like for thunder, T has moved a little to the right of M before seeing the flashes, but M's relative position is not relevant to T's observation of the flashes.

But Einstein says, without explanation, that T sees B before A?

Question: Would T actually see B before A? If so, why?

There has also been some commentary about what M might think that T observed if M did not understand Relativity. If T had mirrors and M was observing flashes in the mirrors. But that is not what Einstein said. So let us stick to just what M and T actually observe.

The important takeaway is that simultaneity is not necessarily preserved in a transformation of reference frame. In the frame of T, the lightning strikes indeed happen at different times, so that is why they can be observed at different times.

Here are some spacetime diagrams that might help clarify what is going on. I have used my "relativity on rotated graph paper" method to visualize elapsed proper time along worldlines and to visualize the lines of simultaneity for various observers.

Lightning strikes at events A and B.
From each strike, we draw in
the [green-dashed] light-rays (with speed c) and
the [violet-dotted] sound-rays (modeled with speed $v_{sound}=0.8c$... in the embankment frame) to be received by the train.
The train is traveling with velocity $(3/5)c=0.6c$.

Here are the results (what "M and T actually observe":

In the embankment frame... 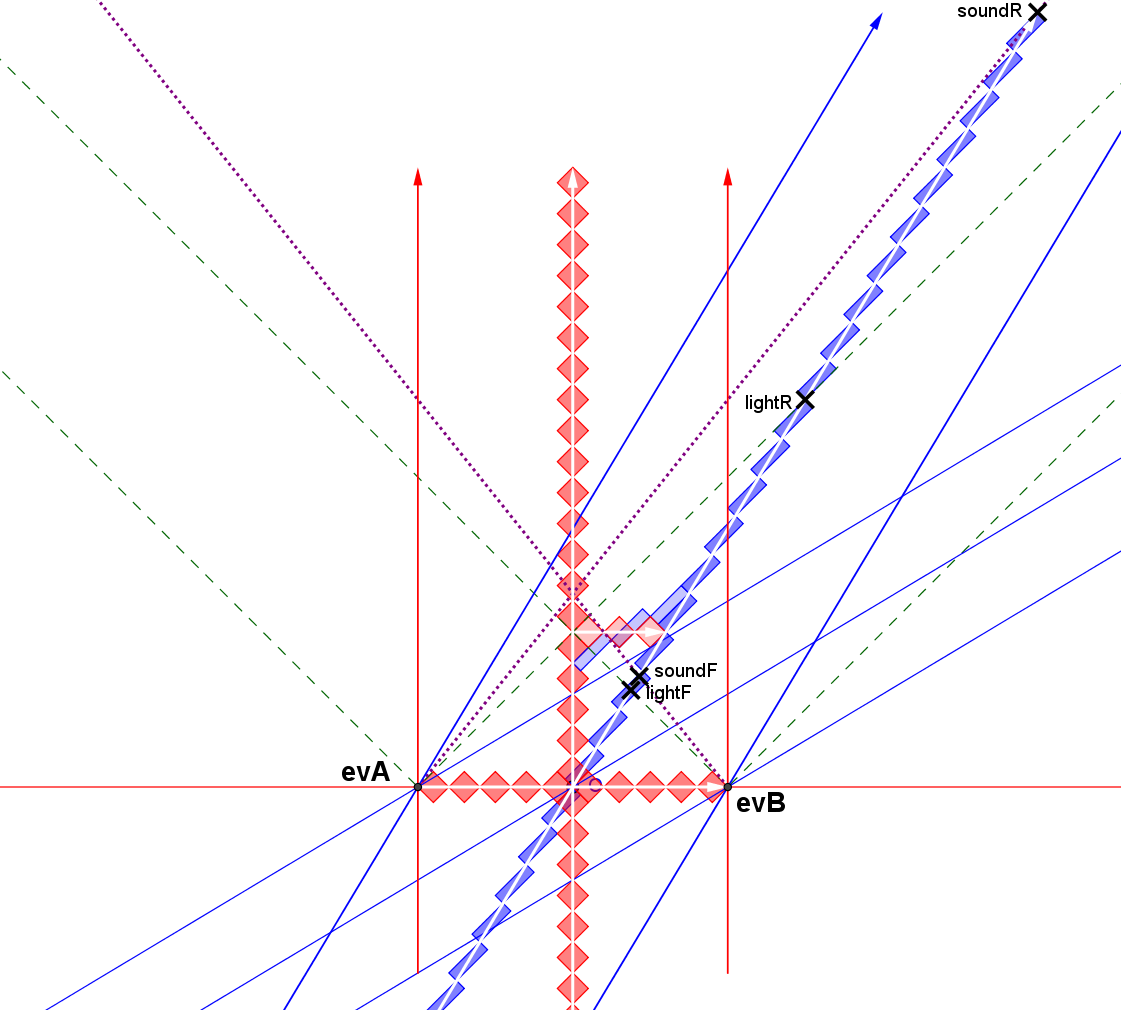 In the train frame... 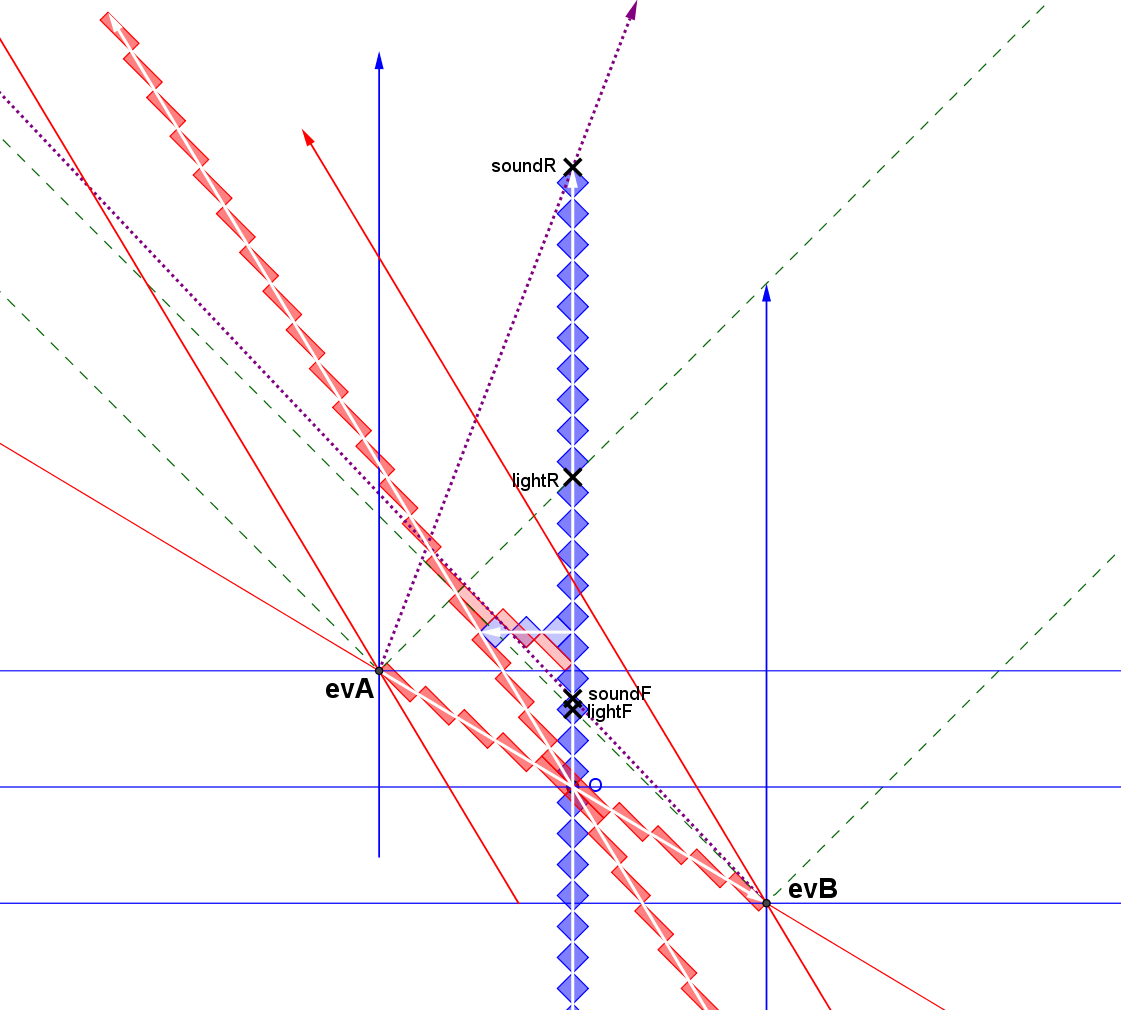 (Admittedly, I can't quite tease out the issues you have with this thought experiment. Hopefully, this might help clarify the issues.)

Unlike sound, the speed of light is relative to the frame of reference of the observer.

Einstein is not talking about relativity of speed here, rather this explanation comes from the fact that speed of sound, or light is not instantaneous as @DanDan0101 said. But let's write it in mathematical details so that it becomes more clear.

Let's instead of thunders use a light lamp at position of each thunder (This is not necessary but it helps us to make the problem less abstract) in other words, we place a lamp at A and another lamp at B. M can activate them with a signal, i.e he can send a signal from M to either A or B to turn them on. Assume that M sends two signals to A and B at the same time, so that they turn on simultaneously. From M's point of view, lamps are turned on simultaneously (like thunders in Einstein's explanation), what about T? Well according to T signals are sent at the same time (because they are being sent from the same place, that's M.) but they don't arrive at A and B simultaneously, why? Well let's say that the distance between MB and MA is $D$ and $-D$ respectively, from T's perspective. T is at the rest relative to himself, but T sees that B and A lamps are moving to left with velocity $-v$, right? So from his point of view, the signal that goes to the right, that's B, will arrive at: $$ct_1=D-vt_1 \to t_1=\frac{D}{c+v}$$

While the second signal which goes to the A will arrive at:

$$-ct_2=-D-vt_2\to t_2=\frac{D}{c-v}$$So they won't be turned on at the same time. Note that it's being assumed that signals go to A and B with speed of light, that's $c$ and I didn't deal with light rays that comes from lamps themselves when they are turned on. Why? Because imho Einstein has not defined very nicely where light rays from thunders will be seen.

Edit (answer to comment): Let's define two events $E_1$ and $E_2$ in M's frame such that $E_1$ indicates the moment when M receives the first light ray at $x=0$ and $t=0$ and $E_2$ indicates the moment when M receives second light ray at $x=0$ and again $t=0$, because these events are simultaneous. Now we want to know whether $E'_1$ and $E_2'$ are simultaneous or not, that's, same events but from T's point of view. Are they simultaneous or not? We can see that with Lorentz transformation: $$t'=\gamma(t+vx/c^2)$$ using $x=0$ and $t=0$ we can clearly see that $t'=0$ for both events, that's, from T's point of view these events are simultaneous as well. And it doesn't depend on T's position. However I think it is not what Einstein meant.

Would T actually see B before A? If so, why.

Note, although it is not proven here this argument applies in any reference frame. So the phrase “at that moment” is not restrictive.

9
Collision and simultaneity in special relativity