How to calculate car engine acceleration and deceleration?

I'm trying to program some kind of car game in unity just for practice. So I want to start off with an engine that behaves normally, so I can then convert the engine's RPM into torque.

Currently, I have capped the engine's max rpm with a variable $maxRpm$.

I have added a second variable $acceleration$ because I don't really know how to have an accurate engine's acceleration (I'm not talking about the car's acceleration here but simply the rate at which the engine's rpm increases).

So to calculate the engine's RPM, at each physics update I take my $rpm$ variable and add to it the input of the gas pedal (between 0.0 and 1.0) times the acceleration times the elapsed time between two updates.

And now I'm wondering how to make the engine's speed decrease when the gas pedal is fully released, I've tried to find formulas concerning engine braking but didn't find anything, anyone as a clue?

I don't know whether there are any general formulas concerning engine braking, but you could incorporate drag proportional to the car's velocity:

Real drag due to aerodynamics is usually taken to be proportional to $v^2$, and also the (frontal) surface area of the car:

where $\rho$ is the density of the medium (in this case: air). I think that the model proportional to $v$ would emulate engine braking slightly better, but you can try both and see which feels more natural.

tl;dr: The value you are looking for depends on the clutch design, is constant in power for the most common type of manual clutch and only really affects the gear shifting sound anyways.

Nothing in the physics world is discontinuous, but the engine axle is just a short rod inside the engine, a couple of cams inside the engine and a disc inside the clutch. It doesn't have enough inertia to affect how a car feels when driving. Its angular acceleration is greatest when changing gears, not during braking.

When the car accelerates, the acceleration is governed by the car mass (plus cargo) and by the engine torque as a function of its current speed (RPM) and the amount of fuel flow (normally you measure maxTorque(RPM) and then fit a curve onto it) and by the transmission ratio.

When the car brakes, most of its deceleration is comes from the friction between the tires and the road (dependent on both the tire and the road surface). Car's ability to break doesn't depend on its speed or the engine power. There's an electronic system that prevents the brakes from applying too much friction between the wheels and the braking mechanism. The same number also applies when the car accelerates.

When the car coasts, its deceleration is determined by air drag (quadratic function of the speed) and its tires' rolling friction (function of road surface and car type). These two forces also help braking and reduce acceleration.

The engine makes torque based on the rpm and the throttle applied. That torque gets geared through the transmission and differential and finally applied to the tires. Finally, aerodynamic resistance, as well as gravity on a slope needs to be accounted for to get the final acceleration.

At the basic level follow the following steps to estimate the acceleration.

NOTE: That all parameters must be in consistent units, such as Kilograms, Newtons, Meters, Radians and Seconds. So you have to convert rotations from RPM to Radians per Second for example.

Based on the comments the OP is asking about specifically the engine behavior. Below is a realistically looking torque curve for a hypothetical engine. There is a family of curves for different throttle positions. 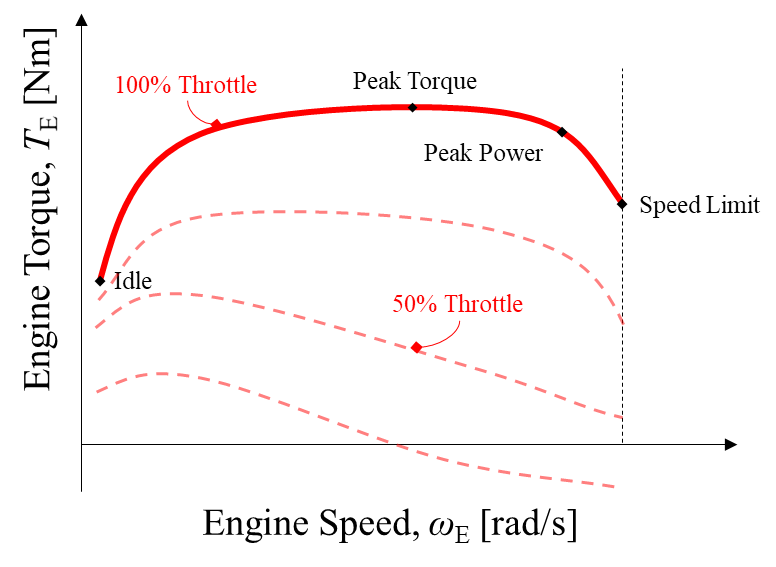 You might want to simulate something similar to this, or you might want to start simplifying the above in various ways. There is no correct answer in terms of Physics. That is unless you are willing to write fluid and combustion simulation code and model the exact behavior of every part of an engine with the myriad of information needed that you don't have.

Not the answer you're looking for? Browse other questions tagged acceleration simulations speed heat-engine or ask your own question.

2
Swords, impacts and elasticity for a noob
1
Question about acceleration & deceleration in real world?
1
Why can motorcycles accelerate faster than cars?
1
How can I calculate deceleration due to friction?
0
Calculate distance with variable acceleration