Is the vector sum of both the forces 0?

A renowned physics book - Concepts of physics by H.C Verma states that "on a very accurate measurement, the above answer is no. The sum of the forces is not 0 although the book is at rest. The earth is not strictly an inertial frame. However, the sum is not too different from 0 and we can say that earth is an inertial frame of reference to a good approximation."

Can someone please elaborate on this? Why the sum is strictly not 0?

The brief answer is, the earth is spinning, and your book is rotating together with the earth. There need to be some force to maintain the rotation of the book, the centripetal force. Without that force on it, the book cannot just rotate by itself. That's where the net force comes from.

That is, you will have maximumly about 0.3% of W left, after summing W and N.

I hope the calculation is correct.

Because, as they said, Earth is not an inertial frame, there are also some pseudo-forces acting on the book, like the centrifugal force related to the rotation of Earth. The book is at rest in this non-inertial frame, which means that the sum of all forces and pseudoforces in this frame is equal to zero. The sum of all real forces is only almost zero.

The force that the book exerts on the table is not a gravitational force, it's a normal force.

But is the force acting on the table due to gravity?

No, it's not, and in fact this force (the normal force) is only indirectly due to gravity. 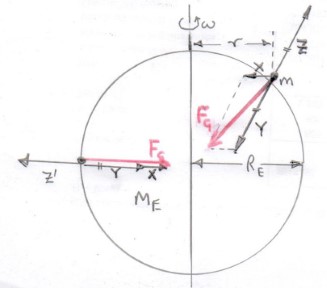 If the mass was not accelerating then its equation of motion would be $F_{\rm G} - Z' = m\,0$ and so those two forces would be equal in magnitude but opposite in direction.

The effect is a bit more complex at other positions on the Earth but non existent at the Poles where the mass would undergo no centripetal acceleration.

Not the answer you're looking for? Browse other questions tagged newtonian-mechanics forces acceleration inertial-frames free-body-diagram or ask your own question.