How can the loss of light irradiance due to both attenuation and the inverse square law be modelled?

When considering the effect of depth on just light attenuation (is within an aqueous solution), the Beer-Lambert law is used. From what I've found, the law is derived by determining the fractional loss of radiant flux, $\phi$ for an infinitesimal depth $dr$ and integrating over the depth $r$:

Therefore I assume that to model the effect of the inverse square law on top of this the left half of the above equation has to be changed in some way? Given a light source of distance $d$ above the surface of the water, I have calculated an expression for the fractional loss due to the inverse square law: $k\frac{(r+d)^2}{r+d-dr)^2}$ (essentially the ratio of surface areas for the spheres with a radius difference of $dr$).

This similar question, for sound attenuation, confirms that the phenomenon are independant

Am I on the right track? Or, more importantly, is there an existing model already? A simplification would also be useful as this is only for a high-school level 'extended essay'

A pencil of radiation with intensity $I$ is travelling along direction $\hat{n}$ confined to solid angle $d\Omega$. 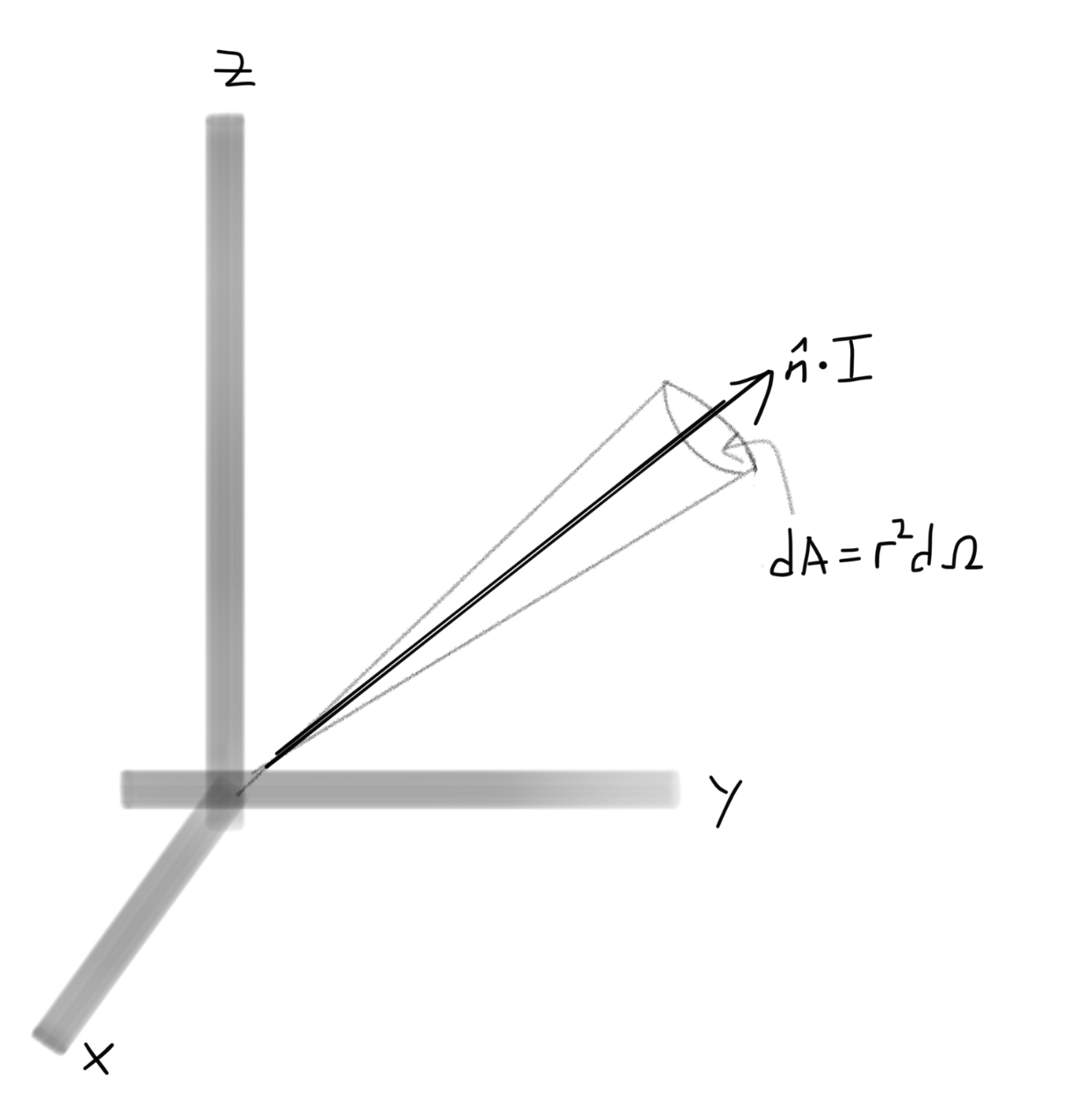 We can describe the path taken simply by changing the radius $r$ from the coordinate system origin, the intensity of radiation $I$ will reduce due to attenuation by the material coefficient $\alpha$ and due to the expansion of the surface area element $dA=r^2 d\Omega$ associated with the solid angle.

We want to solve,

This is a first-order linear ODE which you can solve yourself, but the solution is proportional to

If this was simply the Beer-Lambert law we would expect the exponential term to simply have an $r$ dependence. The solution has the $r^3$. Implying an additional $r^2$ due to the expanding surface area reducing the intensity faster.

Not the answer you're looking for? Browse other questions tagged optics attenuation or ask your own question.

4
How is “Band Intensity” related to absorption coefficient
0
Signal loss in non-reflected light through a tube proportional to square of the length?
12
Light's inverse square law: Does it require a minimum distance from the source?
0
Measuring the irradiance due to solar radiation with a pyranometer
1
Inverse-square relationship and seeing stars from far away: Is there maximum distance from which we can see a star?
0
What is the relationship between wavelength and PD area in optical wireless communication?
0
Inverse square law and how it applies to projectors
1
How to simulate an inverse square law dependence of radiant flux from sampled rays?
3
How does the attenuation coefficient of white light in water compare to the attenuation coefficient of monochromatic light in water?
3
Experimental suggestions for size and shape of single optical photon (wavepacket)?