Can I use the expansion of the universe to create or destroy energy? 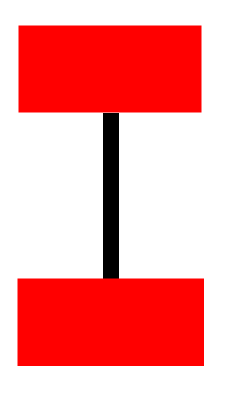 (The objects are not attached to each other. The red objects are much heaver than the black one, and the setup is balanced.)

These objects are now moving away from each other. There are two scenarios that I think might happen:

Where is the flaw in my logic?

Gravitationally bound systems do not expand very much because of cosmological expansion. For example, the predicted general-relativistic effect on the radius of the earth's orbit since the time of the dinosaurs is calculated to be about as big as the diameter of an atomic nucleus; if the earth's orbit had expanded according to the cosmological scaling function a(t), the effect would have been millions of kilometers. For more on this, see this question: Can the Hubble constant be measured locally?

So yes, a local observer can detect strains and stresses due to cosmological expansion, and these are capable of doing work, but in your example, they would never be enough to achieve lift-off of the red blocks.

They don't have gravitational potential energy anymore; they can't attract each other because of the expansion of the universe forcing them apart.[...]

When the Universe expands, the distance between gravitationally bound objects does not increase (see here). That is why the red objects will never start to move away from each other (unless the Big Rip happens).

Not the answer you're looking for? Browse other questions tagged general-relativity energy gravity energy-conservation potential-energy or ask your own question.

75
Is the total energy of the universe zero?
37
Can the Hubble constant be measured locally?

1
Expansion of the Universe: Conversion of gravitational potential energy to kinetic energy?
11
Can entropy of Universe be constant?
0
Where is the mass energy of potential energy (such as for the universe?)
3
How confident are we that mass is not being lost in the universe?
1
Could black holes be driving the expanding universe (dark energy)?
2
Universe expansion / contraction ambiguity