What happens when electrons reach the battery? 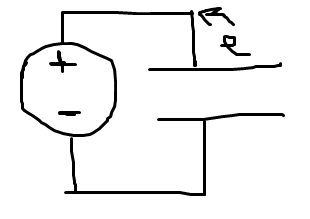 The voltage source does work on the charges to put them onto the bottom plate until the amount of charge $Q$ on the bottom plate is given by $Q=CV$, where $C$ is the capacitance and $V$ is the potential difference between the two sides of the battery. The power source doesn't store charges like you propose.

I will rephrase your question as I interpret it. Perhaps this is not what you're getting at, but here goes regardless.

Even a small flashlight battery can push a coulomb of charge through a circuit. If you start with an even mix of protons and electrons everywhere (so there is no net accumulation of charge anywhere), and then you remove a coulomb of electrons from the negative terminal and add a coulomb of electrons to the positive terminal (which is what you're doing if you drain the battery through the circuit), now you should have +1 C and -1 C accumulated at the terminals, an inch or two apart. Thus there should be a ginormous force between the terminals, $10^{12}$ newtons or something, far more than the battery could possibly withstand structurally. How can this be?

Not the answer you're looking for? Browse other questions tagged electric-circuits charge capacitance voltage batteries or ask your own question.

0
Voltage and parallel-plate capacitors
1
Typo in physics book (capacitors)
1
Charging a capacitor (terminals)
0
Can someone break down what exactly happens in this situation?
0
What happens when a battery is connected to conductors?
1
Why does a floating capacitor act differently than a grounded capacitor?
0
Is my understanding of the process of charging a capacitor correct?