What causes changes in frequency in the Nation Grid electricity supply? [duplicate]

Following the power cuts in Britain this week, we were told that lack of power being generated led to a drop in the AC frequency as shown in this graph: 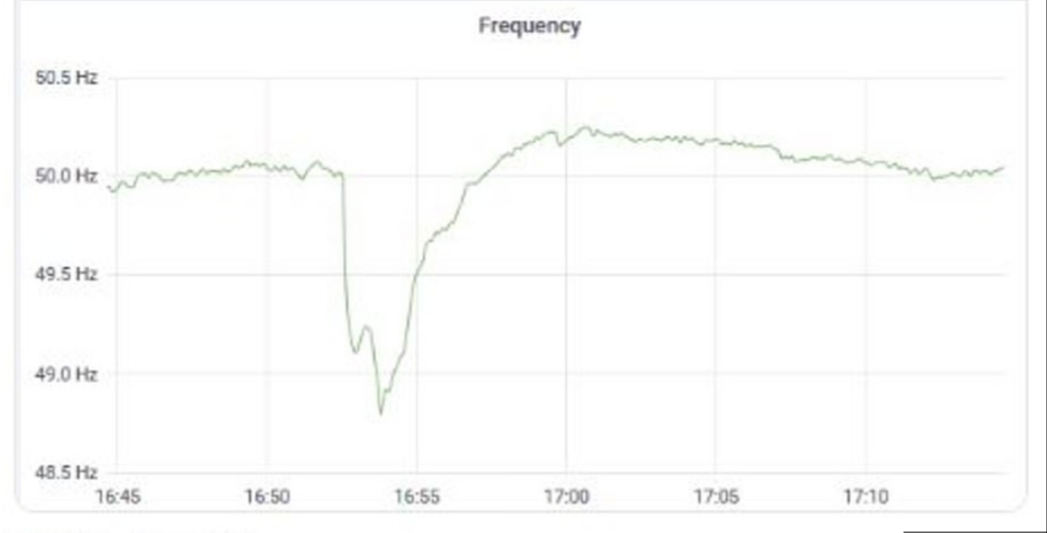 I understand why a stable frequency is important how how nationwide frequency is kept in sync but am not sure what exactly caused the drop in frequency and why.

The control system automatically takes care of these changes as long as it isn't constrained. At the point where the load on the system exceeds the ability of the control system to add more steam to the turbine, the excessive load on the system causes a "dip" in the frequency that cannot be corrected without some type of intervention. Such intervention could be adding additional generating capacity if it exists, rolling blackouts if all generating capacity is currently being used, etc. For the given plot, the 5-6 minute time interval of below-normal frequency implies that human operators had to respond by putting additional generating capacity online in order to meet increased demand.

Not the answer you're looking for? Browse other questions tagged electricity electric-current frequency electrical-engineering or ask your own question.

29
How does load affect frequency on the power grid?

29
How does load affect frequency on the power grid?
8
Ionized Depletion Region, Why aren't those charged being excited?
19
How does a wire carry alternating current?
5
What causes the buzzing sound when the electricity changes into heat?
2
In a laser, why are modes near the resonance frequency favored?
2
How does resistance *really* work? (DC, battery, LED, atoms, electrons)
0
What is the relationship between the complex frequecy of a RLC circuit and the half power frequency of it?