Can force be applied without accelerating?

When I push against a wall, I am applying force on the wall and the wall applies an equal force against mine therefore the wall doesn't move and neither does my hand. But isn't acceleration required to apply force? My hand is not accelerating when I am applyin the force. Still let's assume that the muscle fibres are accelerating, but how is the wall accelerating to apply an opposite force. So are the atoms accelerating somehow?

Acceleration happens when the net force on an object is not zero.

You can apply as much force as you like to an object and it won't accelerate if something else is applying an equal and opposite force.

When I push against a wall, I am applying force on the wall and the wall applies an equal force against mine therefore the wall doesn't move and neither does my hand.

Your reasoning is flawed. The reason your hand and the wall do not move is not because the two forces you mention are equal in magnitude and opposite in direction. The two forces are acting on different objects (one being your hand, the other being the wall), so you can't use both forces to analyze the motion of each object separately. The correct reasoning will follow from explaining the rest of your question.

The best way to phrase this is "net forces cause accelerations". If there is no acceleration, then there must be no net force.

The wall is not moving. Therefore, there is no net force acting on the wall. Therefore, there is/are some other force/forces counteracting the force your hand applies to the wall. What is this force? Well, it is most likely the force the ground, building structure, etc. that prevents walls from moving and makes buildings fairly safe to be in.

Ultimately Newton's third law just tells us that forces arise from interactions. It doesn't tell us anything about how these forces then cause objects to move around, accelerate, etc. That is up to Newton's second law to do. Don't try to use N3L to explain something it does not explain.

Newton's second law of $F_{\text {net}}=ma$ does not mean that in order to apply a force an object needs to be accelerating. What is means is that when a net force is applied to an object then that object will experience an acceleration. You have to understand what equations mean. In physics: equality does not mean any physical interpretation is allowed. Net forces produce accelerations is the correct interpretation. Objects do not need to be accelerating to produce forces.

In fact, there's a branch of mechanics concerned with (static) applied forces that (vector) sum to zero so that there's no net force and, thus, no acceleration.

For example, consider the analysis of a truss in a steady state condition.

Note that there are applied forces and yet the truss is static.

Well aside what other users said, actually a part of wall does move, you can't just see it with naked eyes. The point you are trying to push "deforms" very slightly. If you want to see it yourself, instead of pushing, punch it as hard as you can. I did it my self and this is the result: 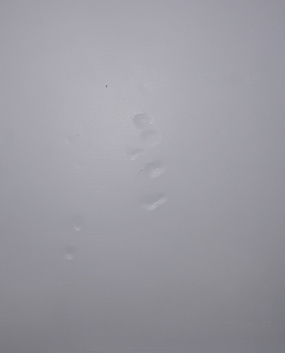 My hand hurts a little though. Anyway the force exerted on your hands also pushs your flesh inside, so your flesh accelerates too (for a moment at least), you can't see it (but you can still feel it). If you were in space, and there was a floating wall in front of you, by pushing it you would accelerate in opposite direction, in the Earth however, it doesn't happen because other forces go against it.

No no, your hand does accelerate the wall. Let's say wall is rigid (well it's not really possible, but let's assume it anyway) and you are on skateboard, if you push the wall away, you will accelerate on opposite direction, what about wall? Well wall is connected to ground, so what you are trying to push is actually earth itself! I mean just think about it, the mass of earth is about $10^{24}kg$ it means the acceleration will be $F/10^{24}=a$ now compute the acceleration yourself based on the value of force.

First of all, F =ma doesn't mean that to apply force you have to have acceleration. F =ma means force F applied on mass m produces an acceleration a and this product of m and a gives the force which was applied. How much force can you apply can only be known when you set some mass on motion, your acceleration doesn't have to do anything with applied force. I can explain you with an example, let's imagine that a cricket ball hits the ground (ground is still) and bounces off, since their is change in velocity(direction has changed) that means there must be some acceleration behind that change and to produce acceleration there need to be a force, force came from ground but ground was initially at rest (ball didn't set the ground in motion but due to action-reaction it got bounced off).
You may have moved but there is friction between your feet and the ground and the center of mass also plays some role. Wall didn't move because of the friction, higher the mass more the friction. Every force develops an acceleration but friction nullifies it.
Hope it helps! If not then let me know through comments.

I will answer each part of your question step by step:

When I push against a wall, I am applying force on the wall and the wall applies an equal force against mine therefore the wall doesn't move and neither does my hand.

If we look at the section of the wall you pushed, a force is being applied by your arm and an equal and opposite restoring force is generated by the rest of the wall to keep itself in shape(This restoring force has certain limits therefore if you push the wall hard enough it breaks). Therefore, the wall has zero net external force in the horizontal direction. As for your hand, consider your palm. Your arm muscles contract to make the rest of the hand push your palm and therefore apply a force on it. The wall the applies an equal and opposite normal force that cancels out the force from your arm. Both your arm and the section of the wall have a net zero resultant force acting on them and therefore have no acceleration.

That would be a wrong way to put it. When a force is applied onto a body, the force causes the body to accelerate. Therefore, we sometimes say that if a body is accelerating, it must be under the action of some forces.

Now that you understand the cause effect relation between force and acceleration, try and rethink these statements and let me know your answer. In mechanics, it is a good idead not to go into the forces onto the atoms themselves as that would unnecessarily complicate the picture.

Not the answer you're looking for? Browse other questions tagged newtonian-mechanics forces acceleration free-body-diagram or ask your own question.

0
What is the force exerted on a body that doesn't move?
2
Newton's Third Law of Motion
3
How can I actually push heavier objects?
1
Confusion with Newton’s third law