The universe is rapidly expanding. If future astronauts built a spaceship that could travel close to the speed of light and took off, there is a certain point where they could not make it back again to earth. The universe would be expanding faster than their spaceship could backtrack. If they pass beyond a certain limit, they would traverse a section of space whereby a return trip would be impossible - even if the earth still existed when they got back. Now… is there some point that the astronauts would know to stop and turn around before it is too late?

The turning point corresponds to the distance where the rocket would just about take infinite time to reach the Earth again. This can be calculated using a cosmological model that describes how the scale factor $a(t)$ changes over time. The model is defined using estimates of the cosmological parameters such as matter and energy density and types plus the Hubble constant; once this is done one can solve it numerically and figure out the turning point. The answer I get is 16.7893 billion lightyears.

How to do it: for calculations like this it is really convenient to switch to co-moving coordinates $\chi$ and conformal time $\eta$ instead of proper distance $x$ and cosmological time $t$. This is because the proper distances change with the expansion of the universe like $x(t)=\chi a(t)$ and conformal time is defined so that light beams move in straight lines on $(\chi,\eta)$ spacetime diagrams. Objects at rest in the universe stay at constant co-moving distances even when the expansion moves them away. One funny effect of the current accelerating universe model is that there is an upper bound on conformal time $\eta_\infty$ that corresponds to the infinitely far future. When I ran my cosmology model I got $\eta_{now}=45.1099$ billion years and $\eta_\infty=61.2027$ billion years (the size of the numbers don't matter much for this calculation). 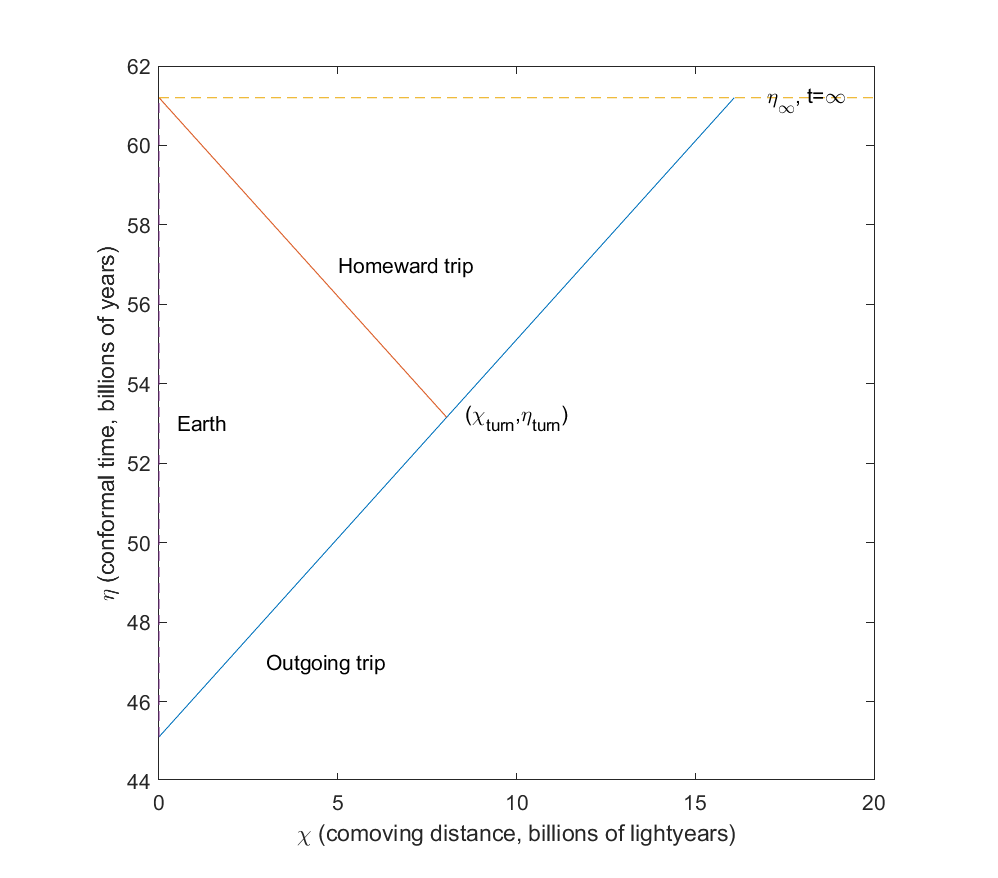 To find the turnaround distance we just draw the spacetime diagram where a 45 degree line emerges from the point $(\chi,\eta)=(0,\eta_{now})$ (the spacecraft starts from Earth and moves at lightspeed - for crafts that move at a fraction of lightspeed just multiply the distance with the fraction). This reaches $\eta_\infty$ at a distance $$\chi_{event}=c(\eta_\infty - \eta_{now}) = c\int_{t_{now}}^\infty \frac{dt}{a(t)}.$$ This distance is the cosmological event horizon, the furthest distance any information or spacecraft from Earth can reach.

But for the astronauts to get home they need to turn around at some point and travel along another light beam towards Earth, reaching it at $\eta_\infty$. So we draw another 45 degree line down from $(0,\eta_\infty)$. Where they cross is the turning distance and time. In this diagram it is really simple: $\chi_{turn}=\chi_{event}/2=c(\eta_\infty - \eta_{now})/2=8.0464$ billion lightyears.

Here I have assumed that the spacecraft moves with constant speed in co-moving coordinates. If you just launch a rocket at some velocity and let it coast, the velocity compared to galaxies around it actually declines as $v(t)=v_0/a(t)$ due to the expansion. To keep a constant co-moving velocity you need to boost again and again.

Not the answer you're looking for? Browse other questions tagged cosmology speed-of-light universe space-expansion or ask your own question.

0
Travelling at lights speed of light as universe expanding

2
Universe Expansion - Could galaxies be moving away from each other due to photon bombardment?
1
Acceleration of Universe expansion
6
The difference between comoving and proper distances in defining the observable universe
0
Effects of the cosmological expansion