Is vacuum energy transient or permanent?

To get a state in which something happens, we need to consider a superposition of different stationary states having different energies. If the spread in the energies involved in the superposition is $\Delta t$, then the time-scale over which the state can change in time is $\Delta t\sim \hbar/\Delta E$. A stationary state has $\Delta E=0$, so $\Delta t$ is "infinite": the state never changes. Nothing happens.

What about curved spacetime?

This answer is based on QFT in flat spacetime, which ignores gravity. In this obviously-incomplete model, the overall energy of the vacuum state has no physical significance: it is unobservable. We can shift it arbitrarily without affecting any testable predictions, just by adjusting the constant term in the lagrangian.

The situation changes when gravity is taken into account, because then the vacuum energy does have observable effects. Physics doesn't yet have a satisfying resolution of the vacuum-energy issue in that context. We don't even know exactly what "vacuum" means in that context.

Feynman diagrams and the "virtual particle" language come from perturbation theory. Perturbation theory is a useful computational method, because it relates vacuum expectation values of the full theory (which is mathematically difficult) to various combinations of "vacuum" expectation values of an easier theory, but the vacuum state in the easier theory is a different state than the vacuum state in the full theory. Roughly speaking, the bubble diagrams illustrated in the answer by G. Smith represent terms in the perturbative expansion of the normalization factor that relates these two different states.

We have some idea of how to include gravity in perturbation theory, but this doesn't solve the "vacuum energy" problem. For that, we need a better understanding of quantum gravity than we currently have.

No, your understanding is incorrect. The “vacuum bubble” Feynman diagrams contributing to the vacuum energy density don’t have any external lines. All particles are virtual, not real.

The following image shows two of an infinite number of such diagrams. In the simplest such diagram (the loop at the top), an electron and positron simply emerge from the vacuum and return to the vacuum. There are no real photons produced, and the process is not really annihilation.

In more complicated vacuum diagrams, such as the second loop, all photons are virtual, not real. 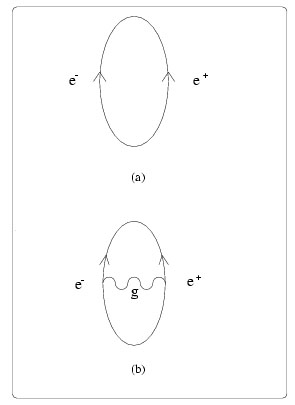 If the vacuum were constantly producing real photons from virtual electrons and positrons, we would presumably have observed them!

Not the answer you're looking for? Browse other questions tagged quantum-field-theory energy time heisenberg-uncertainty-principle vacuum or ask your own question.

104
What is $\Delta t$ in the time-energy uncertainty principle?
34
An explanation of Hawking Radiation

1
Are the particle-antiparticle pairs produced in vacuum virtual particles, and can they interact with normal particles?
2
pair production and perfect vacuum
0
Does annihilation differs from a pair production from two interacting particles?