Why are there so many Doppler Effect formulas?

I was just introduced at my class, a phenomenon, known as the doppler effect, where the observed frequency increases as the source/observer approaches each other, but decreases, if they were moving away. My teacher then told me this equation:

At first glance, it was intuitive for me that this applies to all scenarios, whether the source is moving, the observer, or both. An example scenario would be: 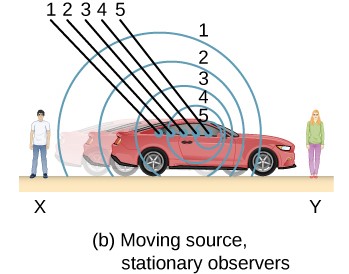 Assume, a car moving towards person $Y$, a stationary observer, with a velocity of $7m/s$, producing a frequency of $500Hz$. If $Vsound=330m/s$, inserting the values onto the equation gives us $510.8Hz$ as the observed frequency. So far so good.

The confusion came when my teacher "switched" the scenario , which in this case, the observer moves, while the source remains stationary. Here's the illustration: 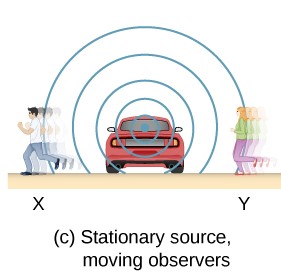 Person $Y$ is running towards the car, the source. Let's say with a velocity of $7m/s$, the exact same velocity the car was moving in the previous case, without any further consideration, I wrote the same answer, $510.8Hz$, as the observed frequency. I was pretty confident that How could this be wrong?

Surprisingly, my answer was incorrect, she said you need another formula for this, which she showed:

I took a minute to look at it, and my mind said, "it's not wrong either...". Using that equation, the observed frequency, $f'$ , would be $510.6Hz$, which is very close to the prior observed frequency ($510.8Hz$), but different is different. I didn't want to waster her time, so I carried on. While she was teaching, and even after the class, I kept thinking why my logic was incorrect.

Basically, my logic is based solely upon Relative Velocity, which you are already familiar with, here's just a quick analogy:

This also applies to any other conditions, whether both the source & observer are moving towards each other, away, or even at the same direction(just at different velocities). And just plug it in onto the first equation, and DONE.

But no, it doesn't work that way! Here are all the 8 formulas for each scenario! Although they're not entirely "different formulas", but still, that'll be a pain in my head to remember. I decided to research more and I found a super formula, one that unites them all: 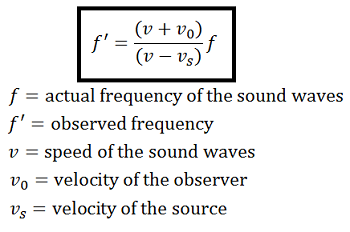 Which is basically, and apparently my teacher didn't tell me, the Main Formula.

Relative velocity for sound waves is not a "symmetric" situation. For example, in the extreme case of a fighter jet approaching a stationary observer at Mach 1, the jet will be traveling as fast as its sound waves. The observer will not hear anything until the jet gets to his position.

There is one factor missing from your consideration: the velocity of the medium!

Take the general case of two cars driving at different speeds towards each other while both blow their horns.

You could take either car as being stationary, and wind up with the same relative velocity (car to car).

But substituting this into the various equations you cite would produce different results for the one correct value for the observed frequency. Only one equation can be correct.

The solution: Use the last, most general equation you cite, the super formula, but include in the rules for using the equation$$\text{Use the medium as your frame of reference for all velocity measurements!}$$ $$\text{Convert all velocities to this frame, before substituting them into the equation!}$$

This even handles the situation where the two cars are driving toward each other on the deck of an aircraft carrier steaming at $30$ knots into a $35$ knot headwind...(Some unit conversion required.)