Can Noether's theorem be understood intuitively?

Noether's theorem is one of those surprisingly clear results of mathematical calculations, for which I am inclined to think that some kind of intuitive understanding should or must be possible. However I don't know of any, do you?

I know that the mathematics leads in the direction of Lie-algebra and such but I would like to discuss whether this theorem can be understood from a non-mathematical point of view also.

The angular momentum with respect to an axis is determining how much the state changes if you rotate it around the axis - how much it depends on the angle (therefore "angular" in the name). So the symmetry is linked to the conservation law once again.

If your intuition doesn't find the comments intuitive enough, maybe you should train your intuition because your current intuition apparently misses the most important properties of time, space, angles, energy, momentum, and angular momentum. ;-)

In this diagram the two parallel squiggles with a line connecting them at the top and at the bottom represent a particle path and a displaced particle path.

You can use this argument to find the exact form of the Noether current by replacing Feynmans horizontal lines with quick kicks by the momentum over a time $\epsilon$. His argument is an honest to goodness proof, it is by far the best proof, and it is the only case in all the history of publishing where a result is best presented in a popular book.

If you make the kicks continuous in time, so that they come here and there, you can still see that the kicks integrate by parts. This argument appears in the introduction to one of Hawking's 1970s papers, and is essentially equivalent to Feynman's "Character of Physical Law" argument, except it appears more than ten years later.

Well, I don't know about any intuitive explanation besides intuition gained by understanding the underlying math (mainly differential geometry, Hamiltonian mechanics and group theory). So with the risk of not giving you quite what you want, I'll try to approach the problem mathematically.

If you know Hamiltonian mechanics then the statement of the theorem is exceedingly simple. Assume we have a Hamiltonian $H$. To this there is associated a unique Hamiltonian flow (i.e. a one-parameter family of symplectomorphisms -- which is just a fancy name for diffeomorphisms preserving the symplectic structure) $\Phi_H(t)$ on the manifold. From the point of view of Lie theory, the flow is a group action and there exists its generator (which is a vector field) $V_H$ (this can also be obtained from $\omega(\cdot, V_H) = dH$ with $\omega$ being the symplectic form). Now, the completely same stuff can be written for some other function $A$, with generator $V_A$ and flow $\Phi_A(s)$. Think of this $A$ as some conserved quantity and of $\Phi_A(s)$ as a continuous family of symmetries.

So much for why the stuff works. Now, how do we get from symmetries to conserved quantities? This actually isn't hard at all but requires some knowledge of differential geometry. Let's start with most simple example.

This is a symmetry such that $x \to x^\prime = x + a$. You can imagine that we move our coordinates along the $x$ direction. With $a$ being a parameter, this is a symmetry flow. If we differentiate with respect to this parameter, we'll get a vector field. Here it'll be $\partial_x$ (i.e. constant vector field aiming in the direction $x$). Now, what function on the symplectic manifold does it correspond to? Easy, it must be $p$ because by differentiating this we'll get a constant 1-form field $dp$ and then we have to use $\omega$ to get a vector field $\partial_x$.

Other way to see that it must be $p$: suppose you have a wave $\exp(ipx)$. Then $\partial_x \exp(ipx) = ip \exp(ipx)$ so momentum and partial derivatives are morally the same thing. Here we're of course exploiting the similarity between Fourier transform (which connects $x$ and $p$ images) and symplectic structure (which combines $x$ and $p$).

Note that the above was done mainly for illustrative purposes as we could have worked in polar coordinates and then it would be actually the same problem as the first one because we'd get the field $\partial_{\phi}$ and conserved quantity $p_{\phi}$ (which is angular momentum).

Here are my two cents. Read the proof it will help you understand and build intuition because it is constructive. It explicitly shows you what the conserved quantity is, given the group of symmetries. If it is too hard to follow and you can't see the forest because of the trees, try a few examples it should help. Also here is a link that may help a bit.

I can only tell that those conserved quantities you have listed above are additive in particles: $P = \sum p_i(t)$, for example. But there are those that are not additive! They do not have special names.

EDIT 1: Maybe Noether's theorem shows explicitly what the conserved quantities are whereas from equations it may be not so evident to derive?

EDIT 3: a page from Landau: 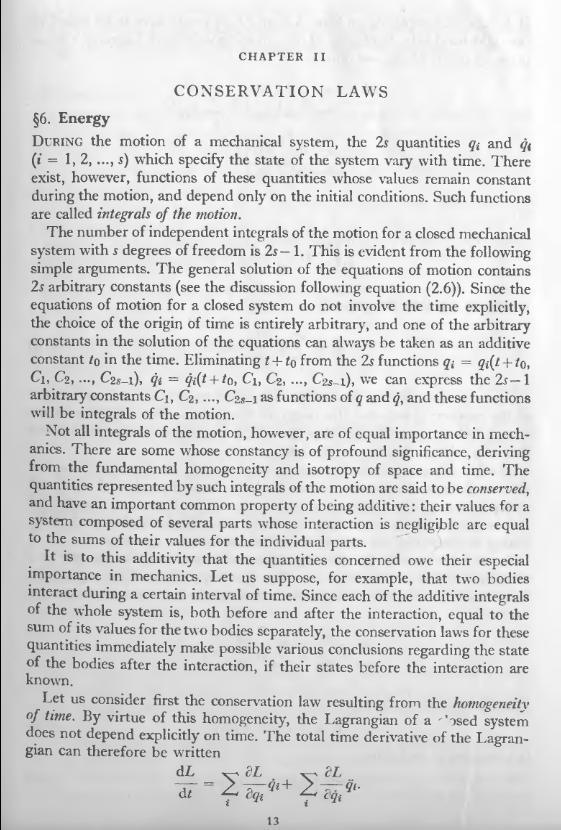 EDIT 4: An example of integrals of motion: 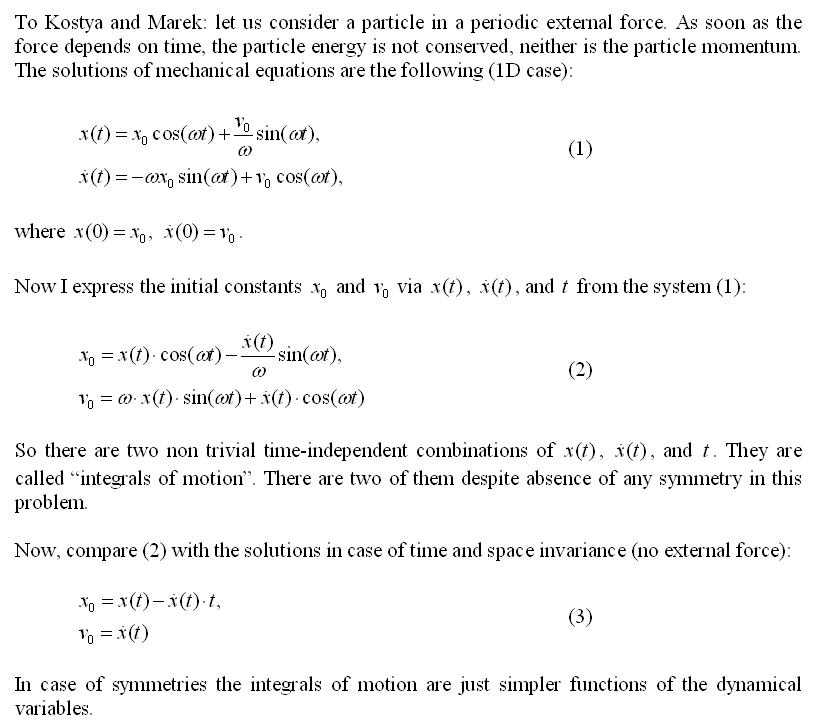 Since it is a mathematical theorem whose physical content you know already, it is difficult to discuss it without mathematics. But still I will try to present it in a simple way. It may help if we understand how it is derived.

Generally we look for an invariance of the action under a symmetry transformation with a time independent parameter. This is then a trivial mathematical identity. Now it is observed that if the dynamical variables obey the equations of motions then action becomes stationary even if the parameter is time dependent. We observe that the variation of the action - which must be zero since the action is stationary - can only depend on the integration of the time derivatives of the parameter. Now integrate by parts to take all the time derivatives off it and keep the rest in the integrand. Since the parameter is arbitrary, its co efficient in the integral must be zero. Now this coefficient is time derivative of something whose time derivative is zero. Therefore this "something" is constant or conserved in time.

Just had a quick look at the answers and I think a point is being systematically missed.

which should be understood as

*Independence of time ↔ there exists a conserved quantity E, which we have agreed to call "energy".

The role of time independence is to arrange that after you remove all derivatives from $\varepsilon$ via integration by parts, its coefficient turns into a total time derivative.

See Townsend (from whom I learned this) for more details.

Not the answer you're looking for? Browse other questions tagged symmetry conservation-laws lagrangian-formalism noethers-theorem or ask your own question.

4
Symmetry of physical laws
3
Can anyone provide a simple, inuitive explanation for Noether's Theorem?
0
How do symmetries of nature give rise to the conservation laws?
0
Is it possible to understand Noether's theorem without advance mathematics
51
What's the interpretation of Feynman's picture proof of Noether's Theorem?
18
Layman's version of Noether's Theorem (or the intuition behind it)
7
Noether's theorem vs. Heisenberg uncertainty principle
7
What does it mean, when one says that system has $N$ constants of motion?
3
Intuitive explanation for why time symmetry implies conservation of energy?
2
Why is momentum conserved (or rather what makes an object carry on moving infinitely)?
See more linked questions