Do dieletric mirrors and other reflective surfaces have a maximum intensity to which the absoprtion coefficient increases?

That is, if you shine a laser at a dielectric mirror so that the intensity(photons/seconds*cm^2)becomes sufficiently large, the scattering of the photons off the electrons in the surface atoms becomes inelastic. That is, the incident electromagnetic fields from the photons become intense enough to cause the valence electrons to gain enough energy to equal the work function; causing ionization. So for instance, if you shine a 580nm, multi-megawatt laser beam with a beam diameter of 1mm at a typical optic lab mirror, the energy density(power) will be large enough to burn right through the mirror.

Yes, there are maximum energy density and/or intensity thresholds that any mirror can withstand. Such limits are generally known as laser damage thresholds, and there are multiple different physical mechanisms responsible.

Thermal effect are one cause. For example, no dielectric is ever perfectly dielectric and so still have some small amount of energy absorption. Therefore, if the intensity is high enough then the mirror can melt or crack due to thermal shock/stresses even though the total percentage of the intensity of the incident light being absorbed might be very small. At high enough optical power, even specks of dust or other impurities absorbing light might create enough heat to cause damage to the optics, something that I know is a major problem for e.g. large scale laser systems such as the LLE or NIF.

In addition at high enough intensities, there are certain optical nonlinear effects that can lead to damage. A nonlinear optical process is any physical process that effectively involves multiple photons at once. For instance, the process of ionizing some valence electrons which you mentioned in your question is known as dielectric breakdown in this context, and is a possible physical mechanism (among others). Nonlinear effects become especially important for laser pulses that are very short due the fact that the average power may be relatively low (so more cumulative thermal effects may be less important), but the peak intensity may be extremely high due to how short the pulses may be.

If you want to dive more deeply into this topic, the RP Photonics Encyclopedia has a decent article on this topic here, including references and some photos of damaged optics such as this: 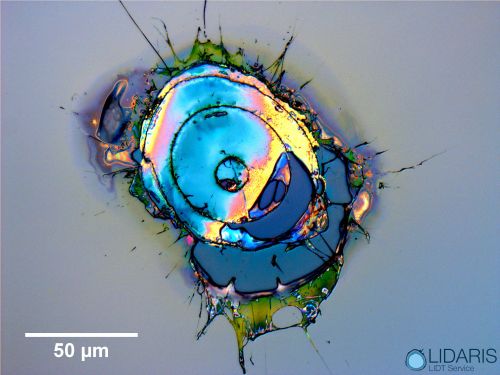 Not the answer you're looking for? Browse other questions tagged optics reflection laser absorption or ask your own question.

18
Physics of Focusing a Laser
6
How can one prove that the number of images formed by the reflecting surfaces of two plane mirrors at right angles to each other is 3?
1
Given two surfaces, one that absorbs light and the other that reflects it, will there be a signficant temperature difference?
0
If 2 beams (of very low intensity) were to cross each other will the resultant point at which they meet be of higher intensity?
0
What exactly is Q-switching?
3
Lasers so powerful they could rip apart empty space
0
Do high power (W) elecron beams traveling through air have the same “blooming effect” as high power laser beams?
3
Understanding the equation $r_1 r_2 e^{i2kL + (G - \alpha)L} = 1$