Two explanations of how electric motor works: are they correct?

Let's consider the simplest model for a DC electric motor: 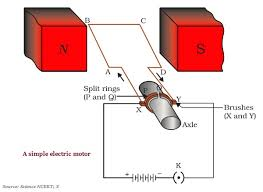 For simplicity, we assume that over a short period of time, the current through the motor is constant. All the discussion below refers to this time period.

In high school, apparently, two explanations of the mechanism of this motor are acceptable:

After learning some degree level electromagnetism, I am pretty certain that explanation 1 is valid. However, explanation 2 is quite strange, in that there is no simple formula in electromagnetics that describes "the force between two magnets". We have the electrical forces between charges and Lorentz force on charges due to the magnetic field, but no analogy for forces that only involve magnets and magnetic fields only; after all, all magnetic fields are supposed to be generated by electric currents.

Can I say the second explanation is unacceptable or wrong based on that?

If someone, say a high school student, has hands-on experience with permanent magnets and knows how it feels when they attract and repel and different distances, and especially if they have had a chance to play around with electromagnets a bit, then I would expect the second explanation would be preferable.

7
Why does an electric motor burn up when you physically stop it?
2
Do permanent magnets have an electric current surrounding them?
0
Why will a 'Non-Electric Faraday Motor' which just uses permanent-magnets, not work?
2
Is toque in an electric motor generated from repelling magnetic dipoles and the Lorentz force on a solenoid?
0
Can external magnets disturb the magnetic field of an electric motor?
2
A question regarding Faraday's integral law
0
How do permanant magnets work (In terms of electric charge and relativity)