Calculating the accurate emf of an electric generator

Let's consider the following simple model of an electric generator: 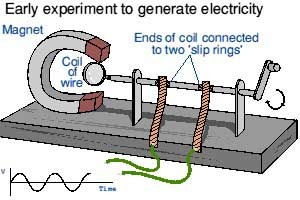 Many textbook say the following:

The magnetic flux through the coil is $\Phi=BA\sin \theta$, where $\theta=\omega t+\phi$ is the angle the plane on which the coil lies makes with the upward vertical. $A$ denotes the area bounded by the coil, and $B$ the magnetic field strength. The emf induced, according to Farady's Law, is therefore $\mathcal E=\frac{d\Phi}{dt}=\omega BA \cos (\omega t+\phi)$.

Question: Is the emf $\mathcal E$ still a sine wave if the change in magnetic field caused by current in the coil is taken into account? Of course, the answer depends on the type of load the generator is connected to, but now let's assume the load is a resistor. How will the waveform be different form $\mathcal E=\omega BA \cos (\omega t+\phi)$? Can I find an analytical expression for $\mathcal E$ in this case?

The effect that you are worried about is self-induction. Given circuit (including the coil and the rest of wires) can be assigned quantity called self-inductance, denoted usually as $L$. The meaning of self-inductance is that magnetic flux through the circuit due to its own current is

To get total induced emf, one has to calculate total flux and negative of rate of change of this total flux: