Vibration in a guitar when playing two strings

I know that when I am playing one string on the guitar, it creates a standing wave which causes the entire body vibrates in its frequency and therefore create sound waves. But, what about two strings?

Do the two waves cause the same body to vibrate in some kind of a sum of the two frequencies? How come you get the sound of both from the same body?

The first image shows a string oscillating at its fundamental frequency $f$.

The second image shows a string oscillating at $2f$.

The third image shows a string (or the wooden soundbox of a guitar or the air in and around a guitar) oscillating at both frequencies at the same time.

Finally, here is a graph showing the height of a point a short way along the last string, as a function of time. Notice that it vibrates with an overall period of $2\pi$, but within each period there is also a faster oscillation with period $\pi$. 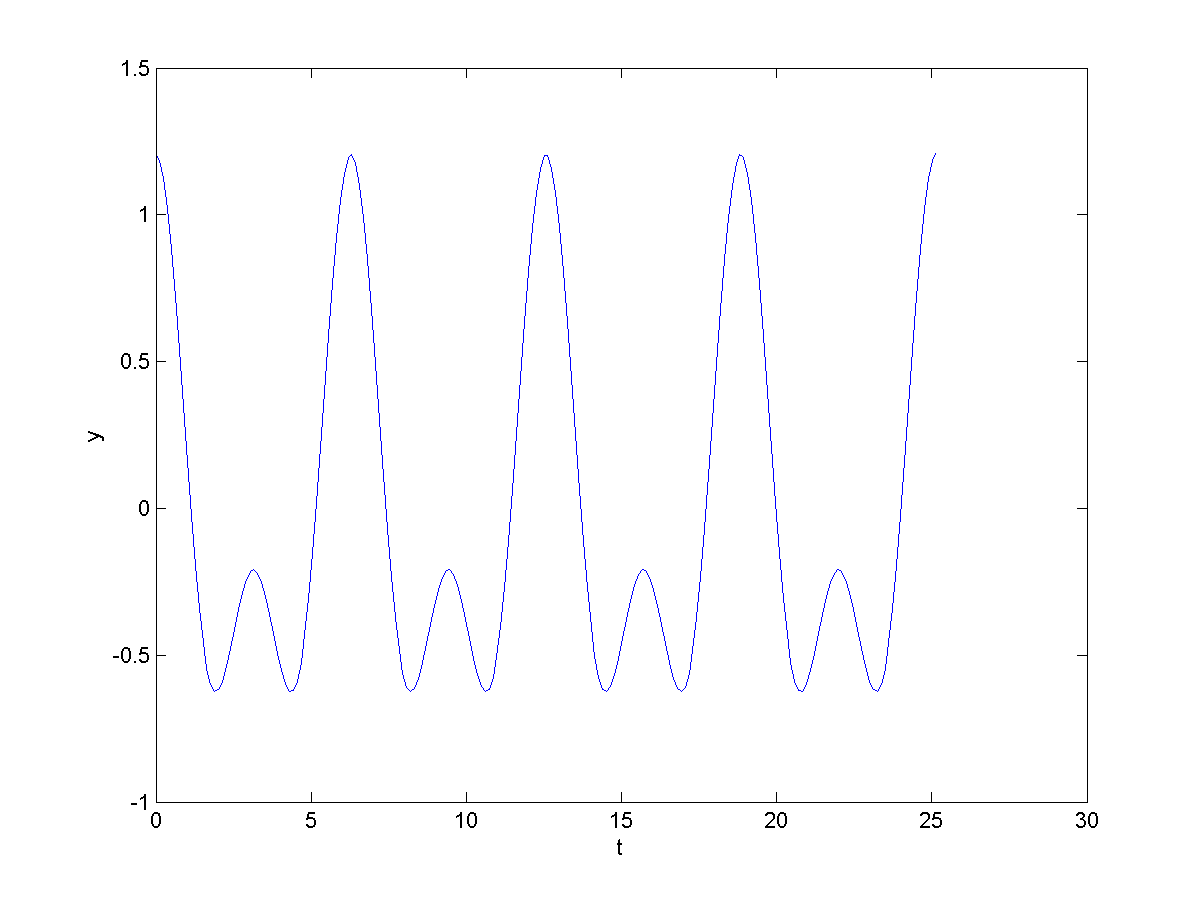 The body of the guitar will vibrate at both frequencies at the same time.

This is because the body of the guitar is approximately a linear system so the vibration at each frequency is independent of each other.

This is also the case for air, which is why we can hear multiple things at the same time.

Do the two waves cause the same body to vibrate in some kind of a sum of the two frequencies?

Yes. The vibration state of the guitar with two strings is a superposition of the two string frequencies. This state doesn't have a well defined frequency.

How come you get the sound of both from the same body?

The guitar body isn't generating two sounds. Its generating just one-the superposition state. Its the ears which are able to discern the two tones being played simultaneously.

In a simple picture$^2$, the vibrations from the two strings add up(in the guitar body) in the manner $\alpha A_{1}(t)+\beta A_{2}(t)$ where $A_{i}(t)$ is the vibration amplitude at time $t$ of the $i^{th}$ string. This is what we mean by linear superposition.(This is they way sound "adds" at low intensities). Here the constants(in time) $\alpha$ and $\beta$ are in general real$^1$. This is important. They are determined by the way the strings were stroked, the tensions in the strings, the dissipation environment, string-guitar coupling etc. But once the strings are stroked, they determine the contribution to the whole sound from each individual tone.

The guitar is now vibrating in a state which follows the above description. Is this state periodic with some frequency? Not really. For general coefficients and general ratio of the two string frequencies, this state doesn't have a well defined frequency--after no amount of time does the signal repeat. The notion of frequency isn't useful here. There is an instantaneous frequency- though its not the frequency in the usual sense.

To re-emphasize-the guitar isn't in two states of well defined frequencies vibrating simultaneously-it is in just one state-the superposition- of ill-defined frequency.

Why are we able to hear the two sounds? I am not entirely sure here but its the brain which is able to discern the two frequencies. There is an obvious aural resolution involved. Again the eardrum doesn't vibrate at two frequencies-it receives the superposition only.

Not the answer you're looking for? Browse other questions tagged waves frequency vibrations or ask your own question.

18
Why does an acoustic guitar body amplify all notes and not just certain ones?
8
How does a guitar work?

5
To what degree does guitar construction affects the vibration of the strings?
3
Harmonic frequencies of a guitar string
1
String Vibrations
2
Why is a single string's vibration very weak but on the other hand, a guitar's string can be very loud?
8
Does plucking a guitar string create a standing wave?
8
How does a guitar work?
9
If all harmonics are generated by plucking, how does a guitar string produce a pure frequency sound?