Are Robert Lanza's claims on Quantum Mechanics in his book "Biocentrism" accurate?

in his popular (pseudo-science) book Biocentrism ch.8 (see here, scroll down to "the most amazing experiment") Biologist Dr.Robert Lanza makes a number of assertions on quantum mechanics based on double slit experiments:

Are any of these assertions incorrect? for more details see above link.

please source with verifiable sources such as actual experiments.

It seems an answer might have been given in the comments, but I will try to add a bit. When it comes to "which way" information and interference patterns, I find the most clear and instructive example to be the delayed choice quantum eraser experiment. It sounds similar to the case you describe in points 4 and 5. 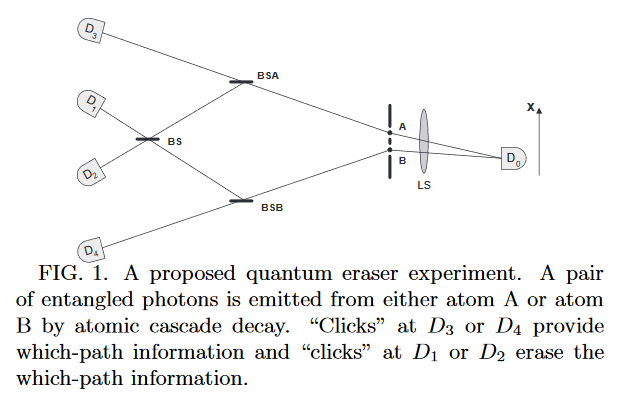 In its most schematic form, it involves the emission of two entangled photons $\alpha$ and $\beta$ from one of two possible atoms. Photon $\alpha$ passes through a series of beam splitters until it meets a detector which belongs to one of two classes: Class 1 detectors ($D_3$ and $D_4$ in the picture) unambiguously shows which atom emitted the photon, class 2 ($D_1$ and $D_2$ in the picture) detectors can be activated by photons emitted by either atom. A detection by a class 2 detector is the same as erasure of the "which way" information of which atom emitted the photon. Photon $\beta$ is emitted towards what is essentially a photosensitive plate ($D_0$ in the picture) and has no information about which atom emitted it.

The result quite clearly demonstrates that when "which way" information has been completely erased (that is, for the cases where there was a detection by a class 2 detector) then interference patterns occur on the photo plate due to the superposition of photon $\beta$ coming from either atom. Interestingly, the interference pattern remains no matter if photon $\alpha$ or $\beta$ are detected first.

However, the general consensus in physics is that there is nothing mysterious about this, so beware before you take it as proof of anything crazier than just good old quantum mechanics.

Edit: What is the role of the order in which the photons are detected? Can we see an interference pattern in $D_0$ and thus predict which of the two classes of detectors we will detect the other photon in?

No. Here's a nice experiment where the two events are happening outside each others light cones, and so are completely causally disconnected. Thus it does not matter whether one or the other is done first with times separated by years - the two measurements do not actually influence each other. The thing is, the $D_0$ result is a mix of intereference and non-interference. You need to compare the $D_0$ results with the results of the other detectors to separate out the interference pattern. Thus you cannot use one measurement to predict the outcome of the other.

Assertion 2b is incorrect. It does not matter whether the polarisation is detected or not. If the the two slots pass orthogonal polarisation only, there is no interference.

0
A very delayed quantum eraser
2
Does simply putting a photon-splitting crystal after a double slit break the interference pattern?
2
Double slit experiment with quarter wave plate and polarization detector
0
Scully’s DCQE paper 1999 - reasons for phase shift
1
Double Slit Eraser - does the wave function collapse and restore or never collapse
2
What if you turn the photon detector on after the paired photon has already gone through both slits?
3
Why Do We Ever Get Interference in a Quantum Eraser?
0
What is the predicted outcome of this quantum eraser experiment?