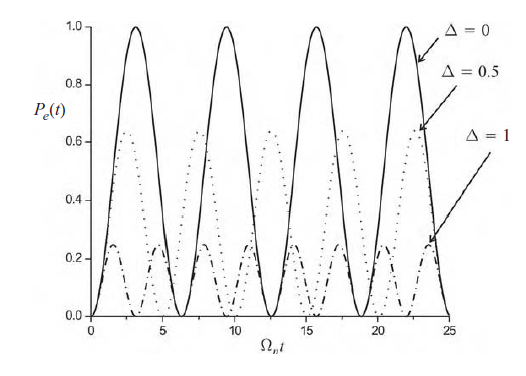 The Rabi oscillation is a simplified picture of the atom-light interaction. The atom is considered to be a pure 2-level system and the energy difference of the two atomic states is given by $E = \hbar \omega_0$.

Now, if we shine light onto the atom, the electric dipole moment of the light couples these two states. If the light is resonant with the atomic transition it drives the atom from its ground state into its excited state. However, since the frequency of the atom and the light does not change, the light is also resonant with the inverse process. Therefore, in the next sequence, the light "takes" the excited atom and brings it back to its ground state. The mathematical description is actually very simple: The probability amplitude $c_g(t)$ of the atom to be in ground state at time $t$ behaves like a harmonic oscillators with a complex damping factor, $$ \frac{d^2 c_g}{dt^2} - i \Delta \frac{dc_g}{dt} + \frac{\omega^2_0}{4}c_g = 0$$ The same is true for the probability amplitude of the excited state, $$ \frac{d^2 c_e}{dt^2} + i \Delta \frac{dc_e}{dt} + \frac{\omega^2_0}{4}c_e = 0$$ The physical picture of the "damping term" for the ground state is, that the atom leaves the ground state and "goes" into the excited state.

My picture for these equations is that we have two oscillations in each equation:

If $\Delta=0$ we obtain pure harmonic oscillators and the atomic state oscillates between its extreme: fully in the ground state and fully in the excited state.

If however $\Delta \ne 0$ the picture becomes more interesting, because we have to choose some initial conditions to solve the equations. Usually we take $c_g(t=0)=1$ and $c_e(t=0)=0$, which breaks the symmetry of the two equations. Thus the atom periodically reaches this initial state, however, it never reaches the "fully excited state". Using the two oscillations from above, the atomic and the laser, we can come up with the following simple picture: If these frequencies are not equal, the two oscillations are not synchronised. Thus, if we start with the same phase at $t=0$ the electric dipole moment of the light excited the atom. However, with time passing the two oscillations build up a phase difference, which grows in time. At a certain point in time the two oscillations are in "opposite direction". Thus, instead of exciting the atom, the light bringst it back into the ground state.

However, the most interesting feature for the $\Delta \ne 0$ case is that the Rabi frequency increases with increasing detuning, $\Omega = \sqrt{w^2_0 + \Delta^2}$. Using the phase shift picture, one can argue that the detuning can only accelerate the atomic oscillation.

Not the answer you're looking for? Browse other questions tagged quantum-mechanics quantum-information quantum-optics or ask your own question.