I'm understand that grounding sets the potential to $0$, but I'm confused as to which potential it sets to $0$. Let me explain my question:

Since there are still negative charges on the sphere near the positive charge, I assume $V_{\text{total}}=0$?

Is my reasoning correct on this? 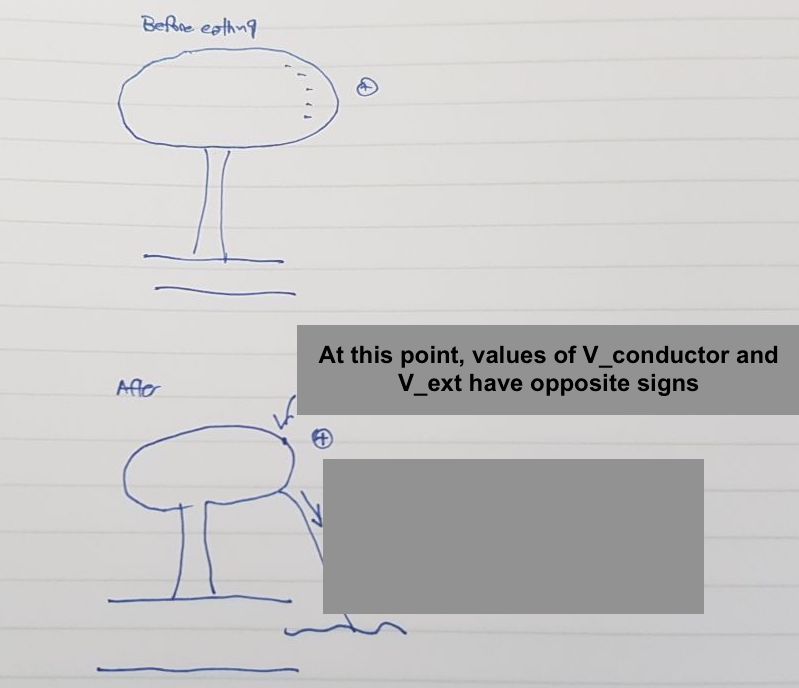 This is unintuitive for me, because the positive charge isn't even connected to the conductor. I initially thought that grounding sets $V_{\text{conductor}}$ to zero instead.

Could someone clarify this and point out any misconceptions I may have? Thanks!

There cannot be a potential difference inside a static conductor. For if there was, there'd be an electric field and charges would redistribute until that force vanishes.

This applies to the situation without earthing where the potential on the sphere is uniform throughout the sphere.

But it also applies when the conductor is grounded. A connection to "earth" is a conducting path to a large enough reservoir of charges such that it's always at a certain potential (say arbitrarily 0). And hence there cannot be a potential difference between earth and the sphere. Thus grounding sets $V_{conductor}=0$.

In the presence of the influencing charge, balancing charges are brought in from earth to neutralize any potential difference between conductor and earth due to influence.

One my phrase it the following way: The electrostatic potential $\phi(x)$ at any point $x$ in space is the sum of the potentials generated by the external free charge $\phi_{ext}$ and the induced charges on the conducting surface $\phi_{ind}$ (this is what OP calls $V_{conductor}$ which I think is misleading terminology): $$\phi(x) = \phi_{ext}(x) + \phi_{ind}(x)$$

Not the answer you're looking for? Browse other questions tagged electrostatics electromagnetic-induction or ask your own question.

1
Charging by induction (and grounding)?
0
What does grounding a plate mean happens to the charge?
5
What would be electric potential due to induced charge sphere?
1
How can the free charges of a conductor redistribute to the surface?
1
charge induction
3
Why do charges accumulate only at the surface of a conductor when it is placed in a uniform electric field?
1
A conductive sphere with holes and a charge in them is grounded, from the potential calculation i get the charges have opposite signs?
0
Electric potential inside a solid conducting sphere, next to other charges