In the paper titled "Baryon- and Lepton- Non-conserving processes" (prl, 1979) S. Weinberg used operator formalism in effective field theory to analyse beyond the standard model processes which violates Baryon and/or Lepton numbers. In particular for proton decay he listed these operators (image attached) which respects the Lorentz symmetry and are $SU(3) \otimes SU(2) \otimes U(1)$ invariant. In general one could have all possible Dirac Gamma matrices ($\Gamma \in {1, \gamma^{\mu}, \gamma^5, \sigma_{\mu \nu}, \gamma^{\mu} \gamma^5}$) sitting inside the bilinear. After listing the operators in a form where we don't have the Dirac gamma matrices or tensors, he says "Fierz transformations have been used to put the various Fermi interactions in the form of eq (1)-(6), and in particular, to eliminate all vector and tensor Dirac matrices".

Now I understand that one can use Fierz identities to write a bilinear as a linear sum of bilinears exploiting the completeness relation, but I don't see immediately how one can get rid of the Dirac vectors and tensors completely in that case. Could someone explicitly show how this can be done? Thanks in advance. 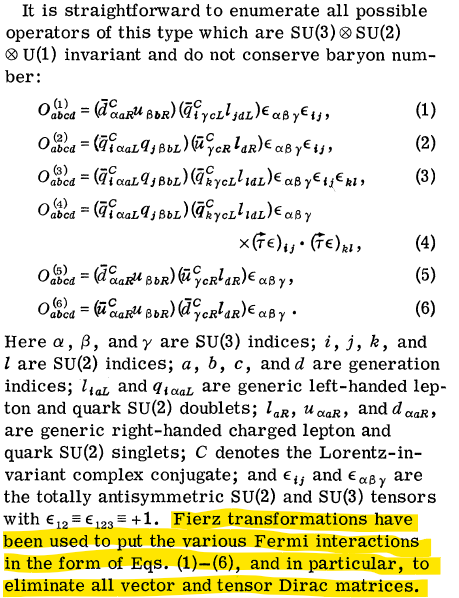 Browse other questions tagged operators group-theory effective-field-theory or ask your own question.

4
Why is the Dirac operator so important - in both physics and mathematics?
1
Number operator and Dirac field (with anticommutation relations)
3
How do simple two-component Fierz identities follow from a property of the Pauli matrices?
2
Operator algebra for momentum and magnetic vector potential
1
Density operator matrices of pure and completely mixed ensembles
3
Hermiticity of Dirac Operator $\gamma^{\mu}D_{\mu}$ and Expansion in eigenmodes
0
Operator algebra for momentum and potential vector in second quantisation
1
Are operator matrices of $x$ and $p$ the same for all systems?