Is it possible for a particle to decay via gravity?

The closest I have seen is decay through virtual black holes.

This paper, for example, works out proton decay rates due to black holes if there are extra large dimensions. The paper starts by heuristically estimating the lifetime in normal space-time, estimating the lifetime as $\tau \sim \frac{1}{m_p}\left(\frac{M_{Pl}}{m_p}\right)^4 \sim 10^{45}$ years. Since we do not have a proper quantum field theory doing the full decay calculation is not possible yet; how much to trust the heuristic argument remains to be seen. There are plenty of potential complications.

Is it possible for a particle to decay via gravity?

This is not the case in the Standard Model, which does not include gravity.

This is also not the case in General Relativity, which doesn't have a particle based mechanism for particle decay, although General Relativity does recognize that the relativistic mass of a system can change in a conversion of gravitational energy to other kinds of matter-energy, or visa versa, under certain circumstances at a macroscopic level.

It is conceivable that particle decay via gravity could happen in a realistic theory of quantum gravity. But, certainly, there is no credible experimental evidence of such a decay being observed in the real world at this time. Since that would possibly be very hard to observe, however, this isn't necessarily remarkable and doesn't necessarily imply strongly that it isn't possible.

I know gravity is immensely weaker than the other forces, but all the other forces interact with particles. Do we need an understanding of quantum gravity to know if this is possible?

While there are numerous proposals for quantum gravity theories, none of them have achieved consensus support or even really credible claims that they are likely to be a correct theory of quantum gravity. So, the short answer is that we don't know and probably aren't very close to knowing.

This said, there are many qualitative assumptions that are typically made about broad general classes of quantum gravity theories that can help us to make educated guesses about what should and should not be possible by analogy to what we know about the Standard Model, about General Relativity, and about proposed quantum gravity theories.

Presumably, any decay via gravity in a quantum gravity would, like decays via other forces, have to preserve all conserved quantum numbers and conserved quantities such as electromagnetic charge, color charge, mass-energy, CPT, baryon number, lepton number, and linear and angular momentum. There is also good reason to think that gravitational decays would not violate CP symmetry.

Are there any theories where this is possible?

Yes. There are theories where this is possible. A recent pre-print addressing this possibility states:

This paper concludes as follows:

In this work we challenged the assumption that the NMC between geometry and the matter fields might be responsible for particle creation/decay in the absence of significant perturbations to the FLRW metric on microscopic scales. We have argued that there is only one consistent interpretation for the modification to the evolution of the energy density of a fluid made of soliton-like particles associated to the the NMC between the gravitational and the matter fields in a FLRW universe: a change in particle-momentum on a cosmological timescale (rather than particle creation or decay). We have considered the possibility that perturbations to the FLRW geometry on microscopic scales, eventually in association to significant extensions to the NMC theory of gravity studied in the present paper, may be responsible for particle creation or decay. We have also have provided a phenomenological description of particle creation/decay by defining an “effective Lagrangian” which incorporates these effects.

The closest gravitation decay process we understand is Hawking radiation. A black holes with area $A=8\pi M^2$ is composed of $N$ Planck masses or with $M=Nm_{pl}$. The emission of a quanta or a boson, so $N\rightarrow N-1$ is a sort of decay process, and will repeat until the black hole is evaporated.

It is impossible in perturbative QFT.

Naively, we would like to have a "beta-like" decay via the diagram: 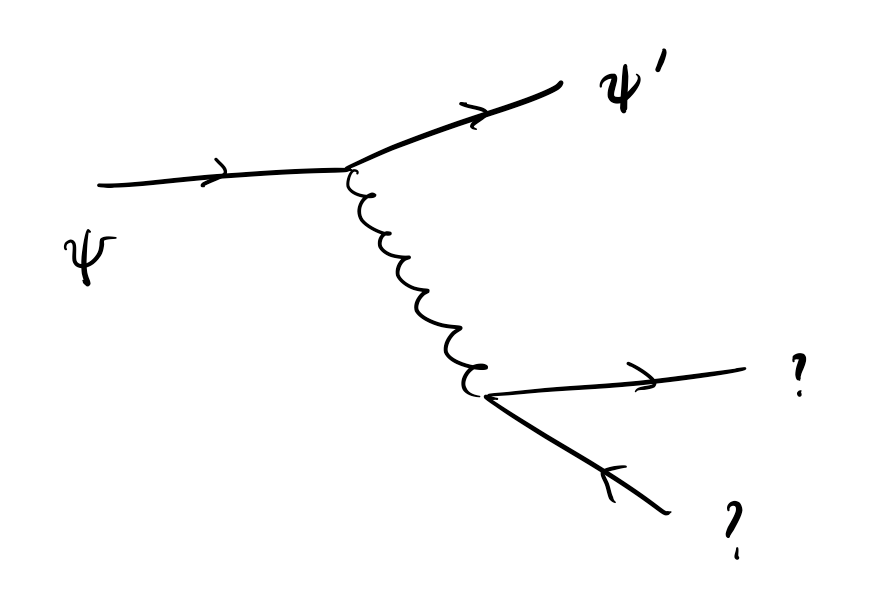 But because the stress tensor $T$ only couples particles to themselves, the particle $\psi'$ is actually the same as the particle $\psi$ and this is not a decay at all. In beta decay, the case is different, as the $W$ carries weak charge, so e.g. neutrons can decay to protons.

This means that the decay is impossible in the effective theory of gravity. On the other hand, a decay through Hawking radiation, as described by Anders Sandberg above and others, is in principle possible.

My message corresponds to my thoughts on this issue and therefore is not described in the literature. The law of interaction between masses and charges has the form $$\vec F=\frac{(ie+m1\sqrt{G})(ie+m2\sqrt{G})}{r^3}\vec r$$ But in nature there are either large masses and a small charge, or small masses of elementary particles and the charge is large compared to the mass, so the interaction between the imaginary charge and the actual mass is not described. The contribution of the imaginary part of the force is determined by the formula $$\vec F=Re\vec F+Im\vec F sin\omega t$$ The frequency must be taken Compton. Why am I saying this, the fact is that imaginary charges form the imaginary part of the mass, and the decay of an elementary particle forms. Real charges - masses cannot have this effect.

Not the answer you're looking for? Browse other questions tagged quantum-mechanics gravity quantum-gravity or ask your own question.

14
Why is there a search for an exchange particle for gravity?
4
Why is gravity weak at the quantum level?
51
Why is gravity such a unique force?
14
Is gravity just electromagnetic attraction?
1
A test for virtual particles by measuring gravity fluctuations possible?