Why does sound attenuate in air differently in different situations?

Sound attenuates in air, and some frequencies go quieter quicker than others. But it feels like which frequencies get quieter should be consistent. Here's two opposing examples:

What does air actually do, and what actually happens in these two situations?

You are right that air works like a low-pass filter. While David's comment about walls also blocking high frequencies is entirely correct and probably the dominant effect in your case, you would also be able to hear this effect at an outdoor party on a flat plain.

The main reason for the attenuation of audible frequencies is not that straightforward to explain, since it is rooted in quantum statistical mechanics. (It comes from equilibration of energy between the air molecules' vibrational energy and their translational energy, which comes from how fast the molecules tend to move.) In the end, though, we get a humidity-dependent attenuation that looks something like this: 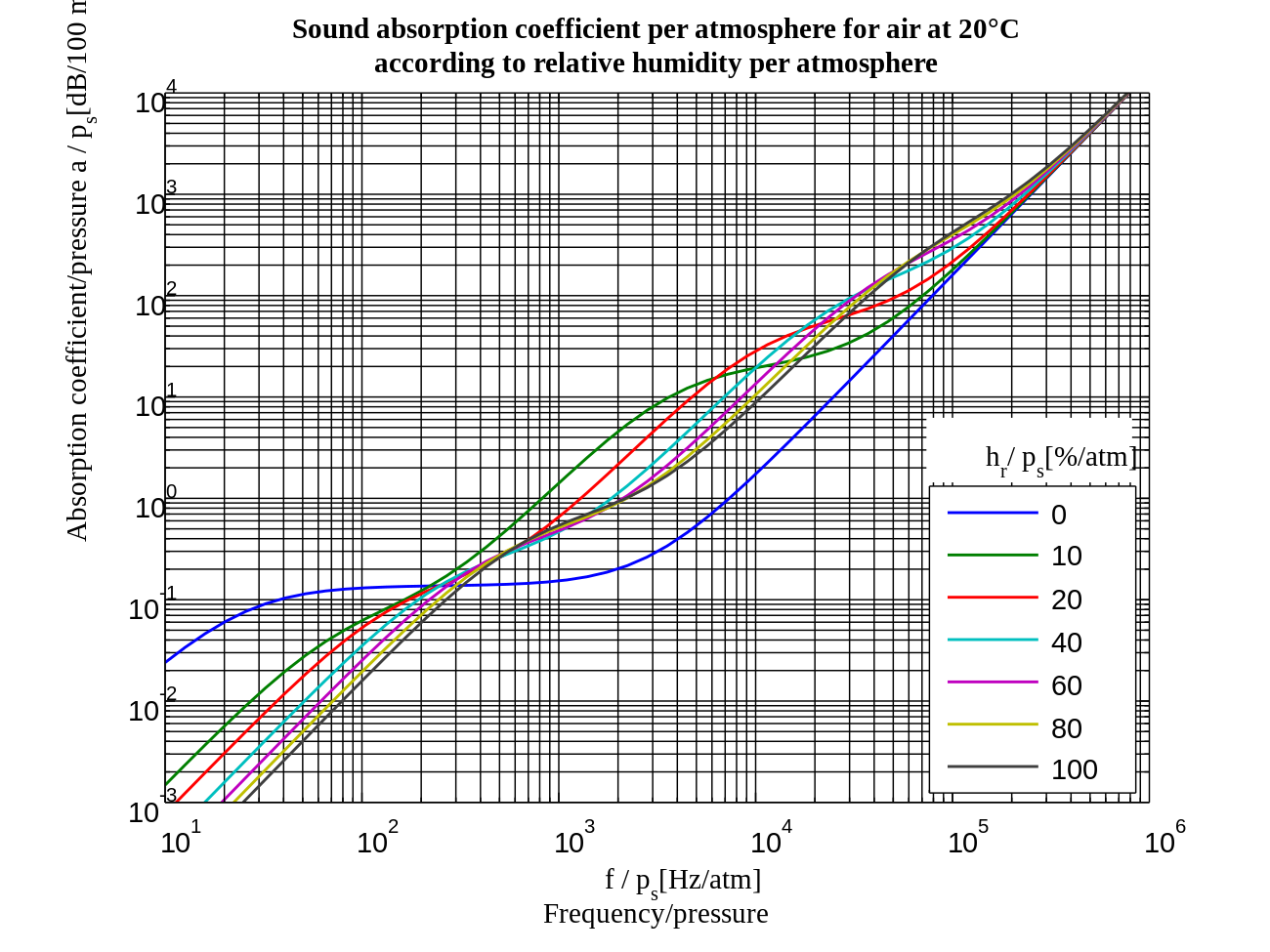 (In the example of a party on a flat plain, you would also get a significant attenuation of the sound because of the interaction between the sound wave and the ground, especially if it is an acoustically soft material like fresh snow.)

I don't have enough knowledge to answer your second example as well, but I am sure that it is not due to attenuation in air. My first guess was that it might be caused by the proximity effect, where bass frequencies are boosted in microphones (and probably also eardrums) when they are close to the sound source.

However, according to this article and these Reddit comments, the real reason is that the headphones nearly enclose your ear channel, which causes the headphone speaker to be well coupled to your eardrum. This fits well with my own personal experience, where pushing my earbuds slightly further in to seal the ear canal better can have a big impact on the bass response. Pulling headphones ever so slightly off my ears also reduces the bass response by a lot.

Not the answer you're looking for? Browse other questions tagged acoustics frequency attenuation or ask your own question.

67
Do low frequency sounds really carry longer distances?
1
How does underwater sound sound?
0
Does switching a laser on create multiple frequencies?
8
Intuitive Cause for End Corrections
10
Why does sound behave differently in water than in air?
5
Why is sound attenuation greater in dry air than humid air?
1
Help understanding sound wave interference from two sources as a function of distance and frequency
1
Why do higher frequencies tend to have a smaller amplitude than low frequencies?
2
Simplifying acoustic test procedure — don't want to bother neighbors with party!