A charge accelerating while confined to an equipotential surface

Suppose I had the following in Cartesian $(x,y,z)$ space, where $x$ is horizontal, $y$ is vertical, and $z$ is depth:

My objective here is to evaluate the consequences that changing the x-velocity of the charge has on the amount of y-work done on the conductive rod.

It appears to me that the faster I move the charge, the amount of work that can be done along the rod increases with the Lorentz factor of the moving charge. By choosing a rod with negligible thickness, we can neglect any work done by the transverse electric field associated with an accelerating electric charge. 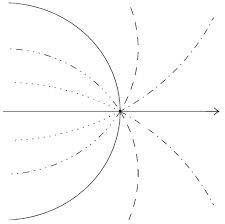 Given these constraints, how may we generate an x-resistance force on the charge that we try to x-accelerate arbitrarily near the origin that is somehow relative to the y-work done on the charges on the rod whose electric field response is "y only" at the y-axis? Does this ultimately have something to do with the potential's contribution to the mechanical momentum of the charge? And if so, does it mean a charge can experience a "forceless" acceleration due to a changing potential (due to the changing polarization of the rod) which effectively alters the mass of a system charges which it is a part of?

Browse other questions tagged homework-and-exercises special-relativity electrostatics or ask your own question.