How is the electromagnetic/gravitational force transmitted? [duplicate]

So I was thinking about how a positive and a negative charge (or positive/positive, negative/negative) interact. I have read previously about how photons carry the electromagnetic force. However, how does this occur exactly?

How does a photon compel a particle to move towards/away from another? At the very least, if we say that a positive charge emits photons and a negative one absorbs them (seems wrong, but I guess that's what happens?), then wouldn't the negative one be repelled away instead?

To properly understand electromagnetic interactions, you need to study quantum electrodynamics (QED). In that case, the easiest way to think about it is in terms of Feynman diagrams. It is not a physical photon that mediates the force, but rather a virtual photon. The difference between physical and virtual photon can only really be appreciated by studying the full mathematical formalism of QED. The idea of macroscopic particles being attracted or repelled from each other is a difficult concept to explain. This is because the transition from the quantum field theory description to the macroscopic world is poorly understood. For an especially easy and intuitive explanation of why charged particles are attracted or repelled from each other see the textbook "Student Friendly Quantum Field Theory" by Robert D. Klauber. It contains a section addressing this very question. Here is a short extract from that section: 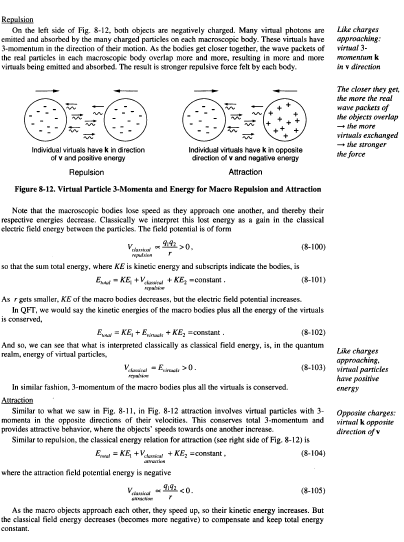 Not the answer you're looking for? Browse other questions tagged electromagnetism forces gravity interactions carrier-particles or ask your own question.

35
How are forces “mediated”?
4
How are fundamental forces transmitted?

0
A rod of charge?
1
Gravitational force and Electromagnetic force?
1
Force on a moving charge in 2 frames
0
Relativity in a current carrying wire
1
How can insulator paper take electrons from the ruler?