Is it possible to build a battery using the elastic property of graphene?

Here is the stress-strain curve of graphene. 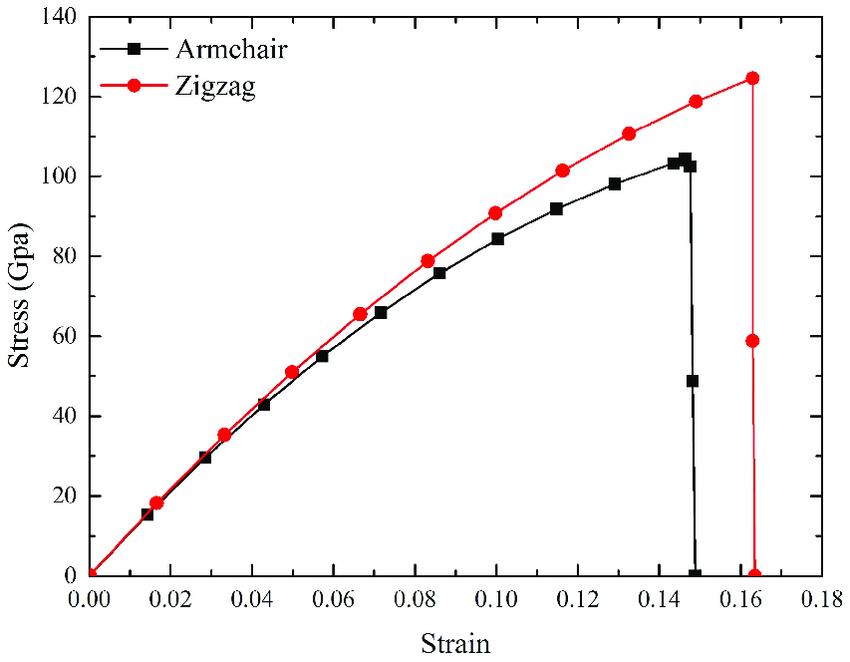 The basic problem is that there is no practical way to apply the required force to stretch the grapheme.

Designing a "recharging system" to apply that much force to recompress the graphene, and making the box strong enough to withstand it, would be an "interesting engineering challenge".

You might also think about what would happen if the device failed mechanically when it was fully charged. It would release the same amount of energy as burning a full tank of gasoline, but in a few microseconds. That could have quite an big impact on the local environment … bad pun intentional.

Actually, this would make a nice problem about work and energy for a first-level dynamics course. Calculate the amount of energy stored in the "spring", and ignoring air resistance, find the height which the car would reach if an explosive failure launched it vertically upwards :)

There is no way round this fundamental "leverage" problem. It works exactly the same as any other lever. If you need a force $F$ to move the car say 500 km (comparable with what a full tank of petrol could do) but you want to store it in a spring that moves say 50 mm, (i.e. 10% of the length of the 0.5 m cube) the force on the spring needs to be 500,000/0.05 = 10 million times bigger than the force it takes to propel the car. The product of force $\times$ distance must be the same, for the movement of the car and the movement of the spring driving it.

Not the answer you're looking for? Browse other questions tagged energy elasticity stress-strain graphene or ask your own question.

2
Why does elastic energy only depend on first derivatives?
0
Energy dispersion in graphene
3
What is the Fermi energy of (undoped) graphene?
1
Chemical potential of graphene : is $1~\rm eV $ too high?
1
Making sense of the stress tensor for elastic deformations
1
Which Formula for the Internal Elastic Energy is Correct?
0
Does increasing the number of stretched elastic bands increase the total elastic potential energy?