Queuing by the event horizon

Assume that a large number of objects are on its way towards the EH and the last objects can observe all the others. It is right to assume that the all – from the last observer’s viewpoint – cross the EH at the same time?

A natural follow up issue is the pattern the observer sees thereafter, i.e. inside the EH.

General relativity is based on the equivalence principle, and one way of stating the equivalence principle is that in small enough regions of spacetime, the effects of gravity become undetectable for free-falling observers. So if your cloud of observers is small, or if we restrict our attention to a small part of it, then nothing special happens as far as they're concerned. The ones in back continue to see the ones in front. However, if A passes the horizon before B, then any light emitted by A after crossing the horizon will be detected by B after B has crossed the horizon as well.

Personally, I find it extremely difficult to reason about this sort of thing unless I draw a type of diagram called a Penrose diagram. I have a simple, nonmathematical explanation of Penrose diagrams in this book: http://www.lightandmatter.com/poets/ . See section 11.5.

You can both ask and answer this question by introducing a coordinate choice suited to an observer freely falling towards the horizon. A good choice is Lemaitre coordinates; see https://en.wikipedia.org/wiki/Lema%C3%AEtre_coordinates

To clarify the question, by "observe" do you mean "receive light signals from" or do you mean "deduce, according to an analysis carried out in such-and-such a coordinate system"? I will comment briefly on both questions

For an observer in free fall nearer to the horizon the analysis will change a bit but I think qualitatively the same behaviour will be seen, for a long line of objects. So the answer is that the line of objects wink out one after the other, not all at the same time. However, if the set of objects is not very much extended in space (to be precise, the spatial distances are small compared to the smallest local radius of curvature of spacetime) then the local inertial frame of one of them becomes a good approximation for treating the whole problem, and then it becomes just like everyday experience; each object can see all the others steadily (see answer by Ben Crowell).

Finally, a confession. I have not done any mathematical analysis before writing this answer. I think it is correct but if I have missed something then please someone point this out and I will update the answer.

Observers falling into a black hole never observe themselves, or indeed anything falling ahead of them to cross an event horizon. Instead they see the horizon retreat before them. They only ever meet the horizon at the moment they reach the singularity, when the horizon has shrunk to a point.

I go through the details in my answer to Taking selfies while falling, would you be able to notice a horizon before hitting a singularity? It happens because although inside the horizon light cannot move outwards, you can fall inwards fast enough to catch up with the light being shone outwards from an object ahead of you. So from your (falling) frame it appears that light is still moving outwards towards you.

The key point is that your statement:

I'll reproduce the diagram from the answer I linked above that shows the trajectories of two observers falling into a black hole:

He'll see gamma ray bursts. People tend to forget about gamma ray bursts, but they're important. It was the detection of gamma-ray bursts, by satellites checking for Russian nuclear explosions, that reawakened interest in general relativity in the 1960s.

Assume that a large number of objects are on its way towards the EH and the last objects can observe all the others. It is right to assume that the all – from the last observer’s viewpoint – cross the EH at the same time?

No. Not at all. See Einstein's 1939 paper on a stationary system with spherical symmetry consisting of many gravitating masses. He said this: “g44 = (1 – μ/2r / 1 + μ/2r)² vanishes for r = μ/2. This means that a clock kept at this place would go at the rate zero. Further it is easy to show that both light rays and material particles take an infinitely long time (measured in “coordinate time”) in order to reach the point r = μ/2 when originating from a point r > μ/2”. Unfortunately Einstein missed a trick here, in that falling bodies don't slow down. They fall faster and faster. As to why, take a look at this: "As a simple geometric consideration shows, the curvature of light rays occurs only in spaces where the speed of light is spatially variable”. That's Einstein again. So your observers are falling faster and faster towards the black hole because the speed of light is getting lower and lower. If this continued, eventually they'd be falling faster than the local speed of light. That can't happen because of the wave nature of matter. So something else has to happen. A gamma ray burst. Your observer sees all the other infalling observers erupting into gamma rays bursts one after the other. BOOM! BOOM! BOOM! See Friedwardt Winterberg's 2001 paper gamma ray bursters and Lorentzian relativity. This was the original "firewall" paper. It's reference 87 in an apologia for firewalls.

A natural follow up issue is the pattern the observer sees thereafter, i.e. inside the EH.

He doesn't see anything. He's long dead. I know people say he doesn't observe anything unusual as he crosses the event horizon, but that's based on a version of general relativity that contradicts Einstein. See this image from page 848 of Gravitation by Misner Thorne and Wheeler: 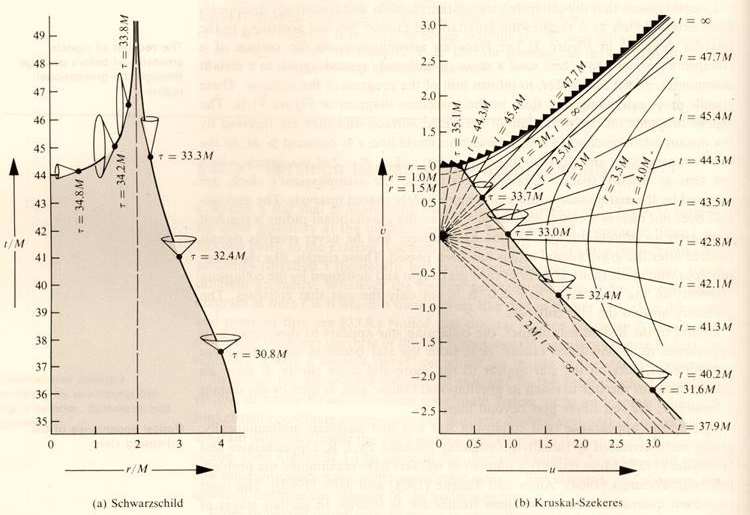 Not the answer you're looking for? Browse other questions tagged black-holes time-dilation event-horizon or ask your own question.

9
Taking selfies while falling, would you be able to notice a horizon before hitting a singularity?
1
0% of speed of clock outside infinite well