We gain greater insight by considering potentials. When free electrons have stopped moving in the electroscope stem, the leaves, stem and top cap are all at the same potential. This potential is positive because of the proximity of the positively charged rod. Hence electrons flow from ground to the electroscope when the ground connection is made.

The knob and the leafs, together, are a single conductor. I think it is clearer to consider only the electrical potential of a conductor, not the induced charges within the conductor. Draw the setup as two capacitors in a conventional circuit diagram, and leave induced charges within conductors out of the circuit diagram. The rod and the knob of the electroscope, separated by a variable gap, are modeled as a variable capacitor, Cvar. The electroscope is represented by a fixed capacitor, Ce. Initially the gap is large and Cvar=0. In situation 1 and 2, the gap is minimal and Cvar=Cvar,max. The electric potential of the knob, V', is variable. In situation 1, V' is somewhere between 0 and V0. In situation 2, V'=0. The charge that flowed through the switch, between situation 1 and 2, is Q=V0/Cvar,max. 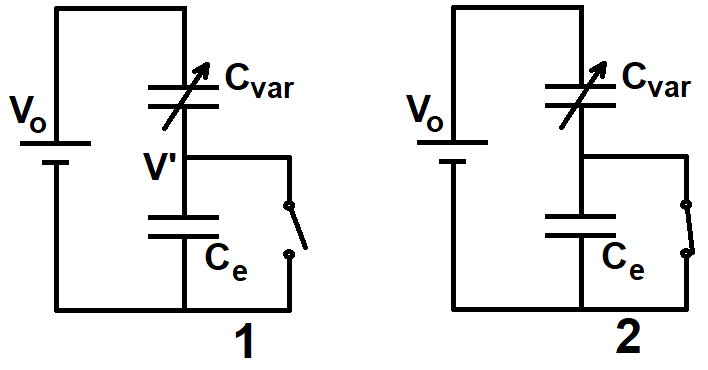 To understand this you need to consider the following things:

Now, coming to your query, are those free electron, which were originally present on the ball before grounding, not repelling the free electrons moving up from the Earth's surface? Well, yes, they are. And that's the precise reason why a further re-distribution of charges happen causing the lowering of leaves by a small amount, as the net positive charge on the leaves also reduces.

We generally imagine a static picture, but in the actual case, the free electrons are not stationary in the metal. They are constantly drifting, it is just that at a given instance the net charge on the ball would be more negative. I hope this helps in clarifying your query.

Not the answer you're looking for? Browse other questions tagged electrostatics electricity charge or ask your own question.