The physics of why 3-wheeled cars are not effective

A century ago, 3-wheeled cars were quite popular, like the Morgan below. 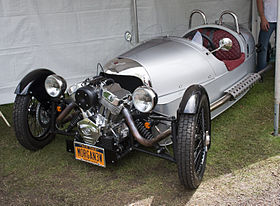 The sale of these cars has been banned later (until recently) in many places due to the associated safety concerns. There are many stories of these cars rolling over such as when turning around corners (for example, the first 10 seconds here and throughout). One source claims the 3-wheel system is actually beneficial as "narrow tires and a low center of gravity ensure grip runs out before lateral forces become a problem".

So the question is, why are 3-wheeled cars considered not effective or safe to drive while 4-wheeled cars are fine? What is the physics that makes this difference with 1 wheel? To me, it looks like lateral forces and banking have to do with this.

It indeed has to do with their rollover dynamics in sharp turns, which sensitively depends on the wheel track width. A trike has no track width on the (solo wheel) end of the vehicle which means it can never be as roll-resistant as a 4-wheeled vehicle of similar proportions.

This instability in roll is made worse in situations where the weight balance of the vehicle shifts to the solo end in a turn, which occurs when a trike is braking as it enters a turn. Then the inside rear wheel lifts off and the trike readily rolls over.

This tendency can be reduced by putting the solo wheel at the rear of the vehicle and steering with the two front wheels, but it cannot be completely eliminated this way.

Current designs for three-wheeled vehicles call for the wheels to tilt into the turn like a motorcycle, but as the optimum tilt angle depends on both the forward speed and the sharpness of the turn, computer control is required, which adds complexity and furnishes the opportunity for catastrophic failure if the system glitches during operation.

3
Why are some forces not included in the sum of forces?
24
Why are a motorcycle's front brakes more effective than back?
2
Why are upthrust and normal reaction force not the same?
0
Are spring forces really non-impulsive? Why or why not?
0
Why cars rotate during small overlap crash test?