What's the difference between the Copenhagen and many-worlds interpretations?

I don't know that much about quantum mechanics, but after reading the Wikipedia pages for the Copenhagen and many-worlds interpretations, I'm left with the impression that the two are describing the same thing.

The many-worlds interpretation claims that the universe has a tree-like structure, and that every time a non-deterministic event happens on a branch, the branch is split in two, yet we won't know which one we're on until we make an observation.

The Copenhagen interpretation claims that the universe is linear, yet after a non-deterministic event, there will be a superposition of several states, until it is observed and collapses into one state.

This would mean that Copenhagen is equivalent to many-worlds, but uses the terms "superposed state" instead of "branch" and "wave function collapse" instead of "observer discovering which branches they're not on".

Is there any prediction that one interpretation makes that the other doesn't, and if there isn't, why does it make sense to talk about which one is correct, since they're essentially saying the same thing?

In my opinion it doesn't make much sense to discuss which one is correct, providing that both fit to all observations.

Quantum mechanics is a theory in physics, which allows us to describe lots of observations, which we couldn't explain before, in a mathematical way. So given certain beginning state it, defined by some observables it gives us the probability that we end up in a certain other state. Here, talking about probabilities and the fact, that a certain amount of intrinsic uncertainty makes it impossible to determine a state exactly (meaning, that, providing we have a measuring device which is able to do measurements with the required accuracy, we can't know all properties with arbitrary accuracy at the same time), appears a difference between other classical theories and QM. The way how QM describes world doesn't really match with human's conception how things happen in real life. This is the point, where interpretations arise.

If you compare to classical mechanics and try to interpret the result: "At t=0 mass m was at x=0 and has velocity v = 2. At t = 2 mass m was at x = 4", I guess there is just one way people might interpret this result, because that's a situation we know very well from our real life. If we take a look at t = 1 we are quite sure to find mass m somewhere between x = 0 and x = 4 (depending, whether there is some acceleration). Interpretations, which claim, that the mass somehow tunnels between x = 0 and x = 4 turn out to be wrong in this way. So I would say in classical mechanics there is only one widely accepted interpretation.

Now in QM we basically can't say what happens between two points, where we take measurements. That's an intrinsic part of theory.

In my understanding, interpretations are just a way of how humans try to translate results of QM theory to the language their brains work. Of course, different people might have different ways of translating the same results in their brain's language. An interpretation, that goes confirm with all observation made is "correct". If it fits to the mindset of many other people, it is widely accepted, if not one's interpretation is a quite unpopular one.

I hope that gave you some new starting-points to think about. As the word "interpretation" suggests, there might be not be the only way to think about it and due to it is somewhere in the intersection between physics and philosophy it's worth to discuss about it.

These diagrams will help you to understand the difference. It is in the placement of Heisenberg cut: 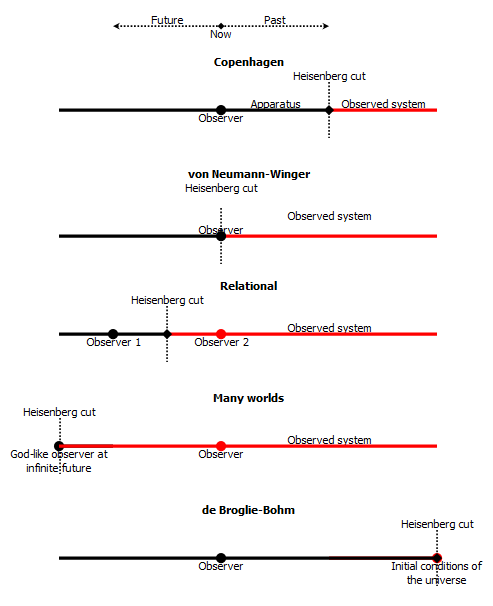 39
Where to draw the line between quantum mechanics theory and its interpretation(s)?