In the case of helium atoms, to ionize the first electron, energy is injected, which is 24.59 eV of the experimental results.

Will helium emit energy in the process? After the first electron is released, the second electron will automatically change its orbit, retreat from a high-energy orbit to the lowest-energy orbit (-54.42eV), and release energy, right? Is there such an ionization experiment that confirms or negates this conclusion?

Initial helium has 2 electrons in the same shell, it's full of electrons at first layer so it's the most stable atom. After 1st electron is ejected to infinity with 24.59eV energy, the 2nd relocates to the lowest energy level -54.42eV, about 30eV energy is emitted. Is this correct? Net energy is plus value in ionization process? What's wrong with this scenario?

The problem here arises from the electron orbital theory of the current mainstream physics. Mainstream theory now holds that electrons in the same orbit, such as 1S, have the same constant energy. This applies to hydrogen atom of a single electron, not to the helium atom. Helium atoms have two repulsive and interacting electrons, which can not be solved by Schrodinger equation and can not be explained by the solution of hydrogen atoms.

The two electrons of helium atom have the same energy in 1S orbit. When one is knocked out, the other's energy decreases, as evidenced by the fact that the second ionization energy is 54.4eV.

After losing one electron, the other reduces energy by releasing photons. This photon release has not been thought of and not been discovered by physical experiments. But it should exist.

So the 1S orbit is not ground state orbit, there is "underground state" orbit.

To zwol , by hydrogen-like I mean the ionized helium atom with only one electron. There is another word I can't remember.

According to the orbital theory of quantum mechanics, an orbital is a container that can hold one or two electrons. Whether one or two electrons are there, the parameters of the container remain the same. This is obviously incorrect.   Let’s say hydrogen atom. The 1S orbital radius of hydrogen atom derived from Schrodinger equation is 52.9pm, which is the same as that of Bohr model. Assuming that we manually force another electron into the 1S orbit, it will certainly affect the radius of the orbit, which can no longer be equal to 52.9pm. This is obvious because of the repulsive force between electrons. If we can get the value by Schroedinger equation, it must be bigger than 52.9.   Although helium atoms cannot be solved by Schrodinger equation, the same conclusion can be drawn by analogy. When one electron or two electrons are in orbital, the state of that orbit will be different. It is impossible to remain the same.

From this analysis, we can also see that the transition of energy level is an ordinary movement of electrons, there is time for the process. The ionization is the upward transition. Electron is knocked to infinity from original lower energy level.

As far as I know the effect you describe isn't seen in helium. That's because the reorganisation takes place while the photon is ejecting the electron. The experimentally observed ionisation energy of helium is the energy difference between the unionised atom and the ion after reorganisation.

However this effect is certainly seen when heavier atoms are ionised by high energy photons such as X-rays. This is the basis of X-ray fluorescence. An X-ray photon ejects a $1s$ electron from the atom and the other electrons then reorganise and emit X-rays in the process.

This effect is alse seen when atoms are ionised by electron beams an in fact it is the mechanism by which X-ray tubes work. In an X-ray tube an incoming electron ionises a tungsten atom by ejecting one of the inner electrons, then the rest of the electrons reorganise and emit an X-ray photon in the process.

Here is an outline of how students can measure the ionization lines of helium, as an example of measuring spectra, and it answers the title,whether energy is released when an electron falls from a higher level to a lower. 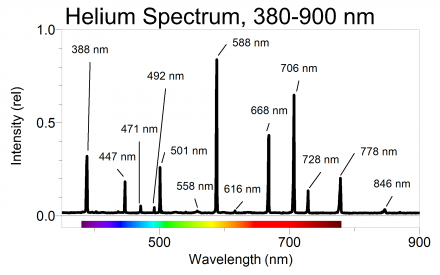 The spectrum shown means the emission of those lines, which, by definition of line emission, means that an electron fell to that line in order to give the photons measured, i.e. the atom gave up energy.

The model of the excited helium atom is approximated by having one of the electrons in the 1s level, the lowest energy level. This electron is called the screening electron, as it may partially screen out the nucleus. The remaining electron, the valence electron, is in an excited state. It emits a photon when it moves to a lower energy state.

So the answer is yes, there are experiments. X-ray levels are harder to experiment with, but there are mathematical models that have fitted the data, and the physics is the same.

The "hydrogen-like" model is inaccurate for $\mbox{He}^{0}$, but, as far as I can remember, it's not qualitatively inaccurate; it only gets the numerical values of the energy levels wrong. It is still reasonable to describe the gross electronic quantum states of $\mbox{He}^{0}$ with the four quantum numbers $n$, $l$, $m$, and $s$ from the hydrogen-like model ("gross" means ignoring spin-orbit coupling, fine structure, hyperfine structure, etc). In those terms, the ground state of $\mbox{He}^{0}$ has two electrons, both with quantum numbers $n=1$, $l=0$, $m=0$ (and different values of $s$). When that atom interacts with a photon and is ionized once (to $\mbox{He}^{+}$), this process (most likely) removes one electron and leaves the other still with quantum numbers $n=1$, $l=0$, $m=0$. There isn't any "underground" electronic state for the remaining electron to decay into.

It's true that the $n=1$, $l=0$, $m=0$ electronic state of $\mbox{He}^{0}$ has a different energy than the same state in $\mbox{He}^{+}$. This discrepancy demonstrates that the hydrogen-like model is quantitatively wrong for $\mbox{He}^{0}$. But the change in energy levels is inextricably coupled to the removal of the first electron. The 29.83 eV that you think needs to be emitted somehow, actually went into reducing the energy required to remove the first electron.

A classical analogy would be: suppose you have two equal weights on opposite sides of a balance scale in a lab on Earth's surface. Whichever weight you pick up first, you have to do less work to lift it to a shelf 10 cm above the pivot point of the scale, because the other weight moves downward as you lift the first one.

(I believe I am saying exactly the same thing as John Rennie's answer says, only with different words.)

You're thinking about this all wrong. A helium atom is an isolated quantum system; the initial state and the final state have to be treated in their entireties, not separated into bits and pieces.

The initial state of the system is (two electrons in the 1s orbital plus alpha particle plus incoming photon) and the final state of the system is (one electron in some orbital plus alpha particle with recoil plus outgoing electron plus some number photons). Next, you have to check to make sure that your final state conserves all the important stuff: energy, momentum, angular momentum. Finally, you can look at the overlaps between the wavefunctions of your initial and final states to see what you're most likely to get.

In this case, the overwhelmingly most probable outcome for an incoming photon near the one-electron ionization energy is that the remaining electron winds up in the 1s state of the helium ion and there are no additional photons. This is because adding photons straightforwardly decreases the probability by the fine structure constant.

4
Effect on electron shells energy levels during nuclear decay
0
Ionization energy comparison
1
Ionization Energy Confusion
0
What is the real difference between tunneling ionization and multiphoton ionization (MPI)?
11
Is the energy of an orbital dependent on temperature?
1
Does high energy limit of ionization process recover elastic scattering?