Static friction in a slope and two boxes problem 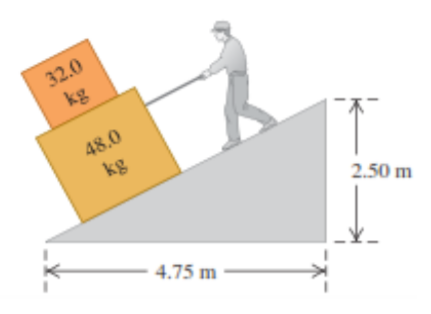 My logic of solving the given problem:

Note: By "horizontal" I mean in the direction of motion

As it turns out, my logic is wrong, and the horizontal component of the top boxes' gravitational force does not disappear, so the correct answer is

What is the argumentation that static friction does not cancel out the horizontal component of the top box?

A more direct way to approach the problem would be to treat both the blocks as a single block because there is no relative motion between them. This approach is explained in the answer by Bob D.

Since the two boxes are moving as one you can consider them as one box of mass 80 kg.

Now since they are moving at constant velocity there is no net force acting on the boxes. The tension force simply equals the kinetic friction force plus the component of weight acting down parallel to the surface

Not the answer you're looking for? Browse other questions tagged homework-and-exercises newtonian-mechanics friction statics or ask your own question.