Mechanics of a particle problem (potential energy vs. work approach)

I'm trying to reconcile two methods of approaching a problem, see picture below:

I've developed two approaches to the problem but they give me two different answers even though they are essentially the same thing. They are formulated as either calculating the stored elastic energy in the cord or calculating the work done by the force from the cord.

This approach is simply recognizing that the amount of work and subsequent kinetic energy the cord can give the particle is equal to the stored potential energy $U=\frac{1}{2}kx^2$. The stretched distance is $x=2(\sqrt{a^2+b^2}-a)$ and thus the kinetic energy of the particle will be:

This approach requires a determination of the resultant force acting on the particle and then calculating the work performed which equals the kinetic energy. We can try and describe the forces as a function of the distance from release, see picture: 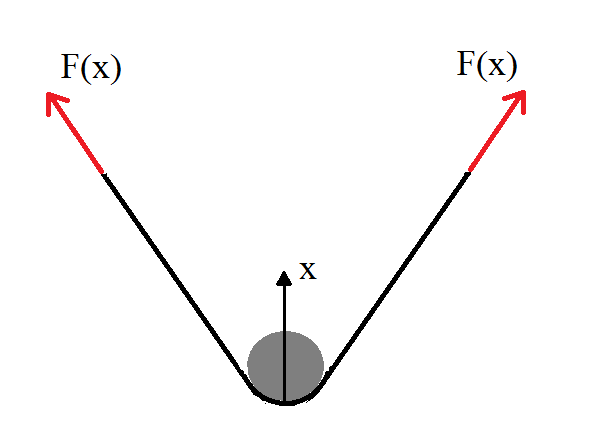 We find that the force is $F(x)=k(\sqrt{a^2+x^2}-a)$. The resultant force acting on the particle is two times the vertical component of $F(x)$ which can be found by using law of sines as:

We can then describe an infinitesimal amount of work as $dW=F_{res}(x)dx$ and integrate over the distance from $0$ to $b$. The integrand is trivial and the result is:

If we now compare the two approaches we see that a factor of $2$ is missing in the second approach. I know for a fact that the answer from the first approach using stored potential energy is the correct answer so something is wrong with the way i formulate my work approach.

What am I missing? Could someone please explain to me?

Could someone please explain to me?

The stiffness $k$ in the second calculation is different than in the first one.

It's as if you had two rubber bands connected in series.

When considering the rubber as if it were split into two halves, each of them pulling with force, the stiffness of each half is twice as great as the original stiffness.

Let's have a rubber with stiffness $k$, each of its two halves having stiffness $k_h$. We apply force $F$ to stretch the rubber by $x$, resulting in each half stretching by $\frac x 2$. Since

there should therefore be

which gives us the correct result.

If you want to calculate it using a single rubber rather than two halves of rubber, the stiffness would be $k$, but the displacement twice as big, so we'd have

Which gives again the same result as the calculation through energy.

Not the answer you're looking for? Browse other questions tagged newtonian-mechanics energy-conservation work potential-energy spring or ask your own question.