Do gravitational waves disperse/refract (like EM waves in a prism)?

What is the relationship between a gravitational wave and a graviton?

What is actually observed is the superposition of this wave with the incident wave. This superposition has two parts, a reflected wave and a transmitted one. In the limit of a low-density medium (such as a gas), the index of refraction is given by n2=1−ω2pf(ω), where ωp, called the plasma frequency, is given by ω2p=Ne2/mϵ0, where N is the number density of electrons. The plasma frequency has an e/m in it from the amplitude of the driven harmonic oscillator, and another factor of e because the amplitude of the reemitted wave is proportional to the amount of charge oscillating. In the case of silica glass, I think the 0.1 μm resonance is probably what is described by the above mechanism, while the other resonances are similar mathematically but involve other effects than oscillation of bound electrons. E.g., the Si-O-Si bridges would resonate at a lower frequency due to the greater inertia of the nuclei compared to electrons. The above does seem to suggest that there's some very universal behavior going on in the interaction of EM waves with matter.

A photon impinging on the surface of the lattice, finds not two slits , but a depth of slits all the way through. The observed effect of the different angular distribution according to the impinging frequency of the photon must be the result of the quantum mechanical interference of the photon, which must be constructive in the angle of refraction given by its frequency and index of refraction and destructive everywhere else, otherwise we would be seeing interference fringes ( actually we do get a second rainbow, but that is a different story :) , though should be similar). Then the problem is reduced to explaining the frequency dependence. I will hand wave again and say that the smaller the frequency the larger the distances in the interference pattern of the probability wave ; the photon will see the lattice gaps differently according to its wavelength, as is true for the double slit experiment, so a fanning out is to be expected.

Now there is a classical and a QM explanation both for dispersion/refraction of EM waves/photons through a prizm.

Now even in the classical explanation of EM waves', it is easily explainable why the wavelength of different EM waves creates the dispersion we see in a prizm.

Now GW have been experimentally observed, they do exist.

Now if we already observed GWs, did we observe their dispersion, they must obey the same physical laws, and they must undergo dispersion, as they change media.

The phase of gravitational waves in the dispersive case and non-dispersive case and dephasing between two waveforms. The total Mass M=106 M⊙, the symmetric mass ratio ν=10−5, e=0.5, p=12M and a=0.9. We set DL=1.00 Gpc, where Z≈0.20 and D≈0.83 Gpc. The Compton wavelength of graviton λg=1.6×1013 km. The cyan, orange and red curves represent the non-dispersive's, dispersion's phase and dephasing respectively. 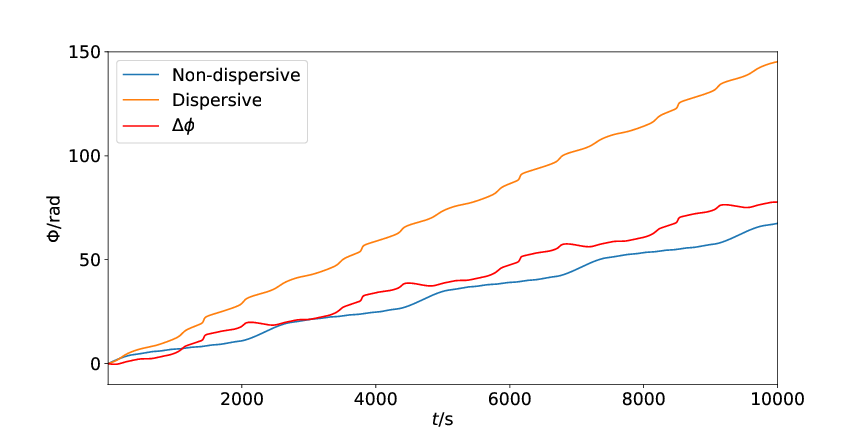 In principle, gravitational waves could exist at any frequency. However, very low frequency waves would be impossible to detect and there is no credible source for detectable waves of very high frequency.

In physics we call waves to any physical perturbation of some quantity that propagates through space or time or or both and that obeys D'Alembert's wave equation or some generalization of it.

This equation doesn't care about the perturbation been on the water (ocean waves), on the pressure of air (sound waves), on the mechanical stresses of Earth's crust (sismic waves), on the field lines of the electromagnetic field (light) or on the curvature of space-time (gravitational waves). For a fixed number of dimensions this equation yields the same predictions for all of them. There can be polarization, difraction, refraction, coherence, reflection and other phenomena, the only major difference is what devices or physical systems should be the ones responsible for those.

See this research paper: Do Mirrors for Gravitational Waves Exist?

So, the surroundings of a black hole can act like a mirror (you can see yourself). The same goes for gravitational waves, they get diffracted so much that could go back to where it came. Thus black holes are mirrors for larger gravitational waves, just a very complicated mirror with a weird distorted image of yourself. By the way, the animation comes from a series of videos done by Viascience (highly recommended).

The search for echoes (like those of sound waves) by reflections of gravitational waves on certain space-times that could behave as "walls" has been investigated.

See this research paper: Emission of gravitational waves from binary systems in the galactic center anddiffraction by star clusters

Gravitational waves are a disturbance in space and time and move by penetrating space-time so no refraction occurs. The wavelength of gravity waves is much shorter than electron and protons.

5
Gravitational refraction
0
Are GWs made of gravitons (are gravitons the quanta of GWs) or not?
2
What really is GW quanta?
3
Can GWs move objects (excerpt pressure on matter) like EM waves?
0
Cosmic microwave background polarization and detecting primordial gravitational waves
13
If different light frequencies travel at different speeds in air, why doesn't the sun have a rainbow halo?