This is taken from "Physics a general course, volume I" by I.V.Savelyev. 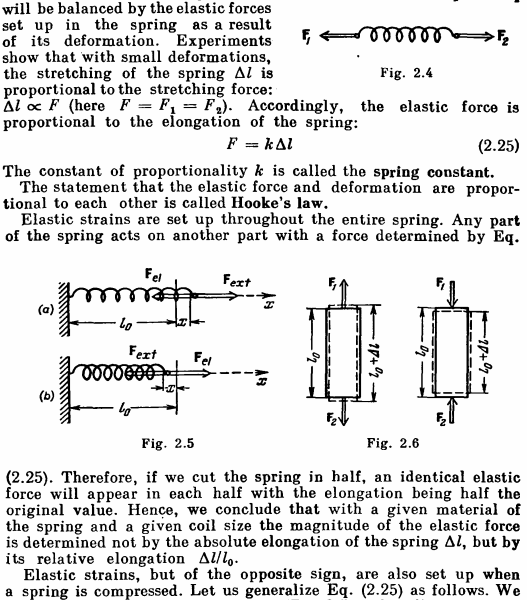 Boolean's answer was pretty good, I just have a slightly different way to explain it. This actually directly relates to what you were asking in chat earlier today too.

Honestly, this text is rather confusing, but my interpretation is this: 1. In saying "Any part of the spring acts on another part" the author is essentially saying that elastic deformation on either side of the "part" contributes to the force on that part. The author is probably trying to suggest the intuition that each adjacent section of the spring stretches those parts adjacent to itself.

Not the answer you're looking for? Browse other questions tagged newtonian-mechanics forces spring or ask your own question.

0
Hooke's law, springs
3
What is the significance of clamping the center of the spring?
3
Does the stretching of a spring depend on its rest length?
2
Conservation of Energy of two charged blocks connected by light spring
0
Estimating Young's Modulus
0
Hooke's Law unclear understanding
0
Hooke's Law sign confusion
0
Springs and Hooke's Law
0
Young modulus in Hooke's law