In a circuit, do surface charges get influenced by external electric fields? [duplicate] 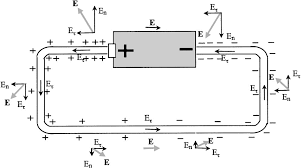 First, since they are in the same direction their power will add up resulting in a doubled potential difference (e.g voltage) (well not totally since the distance at least a bit more), this will translate to the surfaces charges as a double of their density everywhere to maintain the same electric field inside the wire.

Second, The battery will get used more quickly due to the higher current.

However I know that this is wrong because :

The evenements I describe don't seem to really happen in the real life,

So if someone could show me the error in my reasoning,Thanks. TLDR: In a circuit why dosen't the electric field of other external things even help a tiny bit when stacking with the battery's electric field.

Whatever static external fields that may be present in the vicinity of the circuit only affects the charge distribution on the surfaces of the wires. There is no "power" associated with these, assuming they are not changing, or they area changing very slowly.

Not the answer you're looking for? Browse other questions tagged electromagnetism electricity electric-circuits electrons electric-fields or ask your own question.