Ask Question
Asked 9 months ago
Active 9 months ago
Viewed 52 times
0
$\begingroup$
Closed. This question is off-topic. It is not currently accepting answers.

what happens to a rolling ball when it enters to a frictionless surface? does the ball keep rolling forward? how to explain the motion of the ball in the BC and CD surfaces? 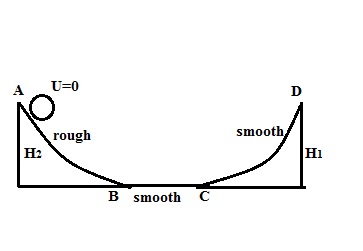 It does not keep rolling (because it isn't matching the surface anymore), but it does keep spinning forever.

It may feel unintuitive - but you actually see this effect often, for example on bowling balls. The bowling floor is very smooth, although not perfectly smooth, so you can easily make bowling throws that end in the bowling ball translating forward while simultaneously spining, say, sideways or backwards. The "grab" on to the floor is so weak do to so low friction, that the spinning can take place almost independently from the translational motion.

What you want to keep track of is conservation of energy. Once the ball gets to point B it will keep the same U and the same K up to point C. After that, what will be conserved is the total energy $E=U+K=mgh+\frac{1}{2}mv^2$. So, the ball will go up a height $h=\frac{mv^2}{2mg}$, before coming down again.