If there is more than just one resistor in series then in the first resistor happens a voltage drop which is not equal to the voltage of the battery. The electrons don't lose all their potential energy across the first voltage. it seems that the resistor knows that there is another resistor after it so it doesn't eat all the electrons' potential and leaves some potential for the next one. Why does this happen?

It has to do with the definition of electrical potential, or voltage. The potential difference $V$ between two points is defined as the work per unit charge required to move the charge between the two points with units of Joules/coulomb.

As charge Q moves through resistance connected to the terminals of a battery the battery does work of $QV$ to move the charge between the terminals against the electrical resistance of the circuit, and the charge loses potential energy in the form of heat dissipated in the resistors.

The above said, the amount of resistance between the terminals does affect the rate of loss of potential energy for a given voltage (rate of work done per unit charge, or power). The greater the resistance, the lower the rate .

you said "For the same voltage across the battery terminals, the same amount of work will be done and the same loss of potential energy will occur, regardless of the number of resistors connected in series across the terminals" I know that this is true but why how can this be true ?

Now Let's say an object is dropped from some altitude above the surface of the earth greater than a height $h$ and it encounters air resistance. By the time it reaches a height $h$ let's say it has reached its terminal velocity due to air friction and its velocity becomes constant, like the average drift velocity of charge that defines current. Let the acceleration due to gravity be a constant, $g$. At the height $h$ its gravitational potential energy is $mgh$. Think of the air between this height and the ground as now constituting a series of resistors. For each fraction of the total height the object falls it encounters an equal fraction of the total resistance, until it reaches the ground and all of its potential energy is lost (to air friction and kinetic energy(which later dissipates into heating up the ground and sound)).

Formally, this is called Kirchoff’s current and voltage laws.

But you asked why this happens. What mechanism is it that make sure that the current behaves this way?

For most circuits, this happens so incredibly fast that we just consider the adjustment to be instantaneous. It’s only in very special cases (fast signals, very high resistance or large wiring) that it has to be considered at all. Usually Kirchoff’s Laws work so automatically well that we don’t think about it.

The voltage drop across an ohmic resistor is given by Ohm's law:

$^*$ Note that for resistors in parallel the argument is not the same. It's not true in general that adding a resistor to a circuit increases the overall resistance in the circuit. This answer is only concerned with your specific series example.

Now, let us take the case of a circuit without any resistors. It consists solely of a battery and a wire. 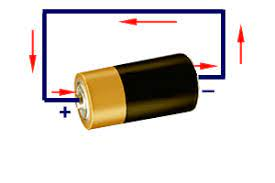 As an electron moves along the circuit (away from the negative end of the battery and toward the positive end), its electric potential decreases, because it is moving further from the concentrated area of electrons.

Since the circuit has no resistors, the current in the circuit is very high, so the electrons lose their potential very quickly.

Now, let's consider the case where we have one resistor in our circuit. Remember that the resistor is made of a less conductive material than the wire, so an electron cannot move as quickly through the resistor.

When the electron closest to the negative end of the battery moves, it causes the next electron to move as well (because of the repulsive forces between electrons). This creates a cascading effect.

As the electrons continue to move toward the positive end of the battery after exiting the resistor, their electric potential continues to decrease (as they are moving closer to an attractive area and further from a repulsive area) until it reaches about zero.

What if we add another resistor next to this resistor? It is easy to see that this would cause the current through the circuit to be even lower. As a result, electrons will bunch up LESS on the "entrance" side of each resistor (after a few electrons bunch up on the entrance side, their repulsive force will cause the electrons behind them to slow down enough that less bunching ultimately occurs). As a result, an electron won't have as high of a potential near the "entrance" of the resistor or as low of a potential near the "exit" of the resistor, so it will experience a smaller change in potential while moving through each resistor.

It's simply due to energy conservation. What does a battery? It uses its own internal chemical stored energy to create potential difference across its terminals and when it's terminals connected to the circuit it potential energy goes to electrons and if there is a resistor attached to the circuit. then first what resistors do in the circuit? They dissipate the energy of electron which comes from a potential difference of battery terminals. Hence if there only loss of energy can happen by a resistor is that circuit is isolated then energy provided battery is equal to the energy dissipated by resistor for which potential drop across the total resistance is equal to the potential difference across battery terminals. It's nothing but KIRCHOFF'S LAW.

Not the answer you're looking for? Browse other questions tagged electricity electric-circuits electrical-resistance potential-energy voltage or ask your own question.

1
Why does the potential drop across a battery and resistor equal the emf of the battery?
7
Questions about voltage
1
What is the difference between a circuit with a resistor and one without it in energy terms?
6
Voltage drop due to a resistor
2
How can a battery offer resistance and act as a voltage provider?
0
How Can the Same Resistance Cause Different Voltage Drops?
1
Understanding Kirchhoff's Loop Law
1
Why won't all voltage be used up on first resistor in series?