If I add more mass to a red giant, will it become a supergiant?

Let's say I have a red giant. If I start dumping more matter onto it, will it eventually become a red supergiant?

I'm guessing the answer is "yes" because when I see this covered in textbooks, they generally only mention mass as the defining parameter (e.g. "Stars with mass greater than about ___ solar masses eventually become a supergiant"). If so, is there a corresponding maximum possible mass for red giants similar to the Chandrasekhar mass for White Dwarfs? What is this mass?

Because you're asking about things that aren't especially well-defined, the answer depends a bit on when and how fast you decide to add mass to your red giant but broadly speaking the answer seems to be "no". The main reason for this, I believe, is that the inert helium core of a red giant (details of what I mean by "red giant" below) is much less massive than the former hydrogen-burning core of a red supergiant was. So the first thing a red giant model does in on the way to becoming a red supergiant is burn a bunch more hydrogen and it does so on the blue side of Hertzsprung–Russell diagram, not the red. You probably will get a red supergiant if you fine tune the accretion rate so that the helium core grows at the rate that keeps the structure similar to what a star of the same mass would evolve to if it was always that mass.

I think the reason you'll see mass as the definitive parameter in textbooks is because the initial mass is decisive. But that's because we also make assumptions about initial composition. i.e. that the star is initially uniform. If you relax the latter constraint, it becomes important: the evolution of a uniform 1 solar mass star is different from a solar mass model with 0.3 solar masses of pure helium surrounded by 0.7 solar masses of a similar uniform mixture.

Now, for some gory detail...

The moniker "red supergiant" is mostly an observational classification rather than a fundamental structural one. These are stars that are "red" (so cool, mostly well below about 5000K) and very luminous. They're usually massive stars (>10 solar masses) that have finished burning hydrogen in their cores but it's nearly impossible to tell whether or not they've started burning helium in their cores. For my answer, I'm going to use a 10 solar mass star, though things might be a bit different for more massive stars.

A "red giant" usually refers to low-ish mass (up to ~2.5 or 3 solar masses) stars that have also finished burning hydrogen in their cores. I associate their observational classification with their being on the red giant branch (RGB), so mostly still burning hydrogen in a shell around a helium core that hasn't yet started fusing. Low-mass stars that have started core helium burning sit mostly together in the "red clump" and stars that have finished burning helium in the core ascend the asymptotic giant branch. These are useful structural distinctions even though observationally it can be hard to tell them apart.

So, first thing I did was evolve a 10 solar mass model from overall thermal equilibrium and uniform composition (what theorists call zero-age main sequence or ZAMS) up to the end of core helium burning (blue line below). I then evolved a 1 solar mass model from ZAMS to a core helium mass of 0.18 solar masses, which put it around the bottom part of the RGB, froze the composition and started adding mass very slowly (orange line once I started adding mass). The model becomes very blue and I gave up once the total mass was about 5 solar masses because it looks like the star will be similar to a more massive star that hasn't yet crossed to the red side of the Hertzsprung–Russell diagram. i.e. it won't be a red supergiant. (I tried to evolve a 1 solar mass model further up the RGB and tried adding mass in the same way but the simulation was too slow.)

I did something similar with a 3 solar mass model (evolving from ZAMS to a helium core mass of 0.4 solar masses) and the same thing happens: the star moves toward the blue side of the Hertzsprung–Russell diagram (green line once I started adding mass). 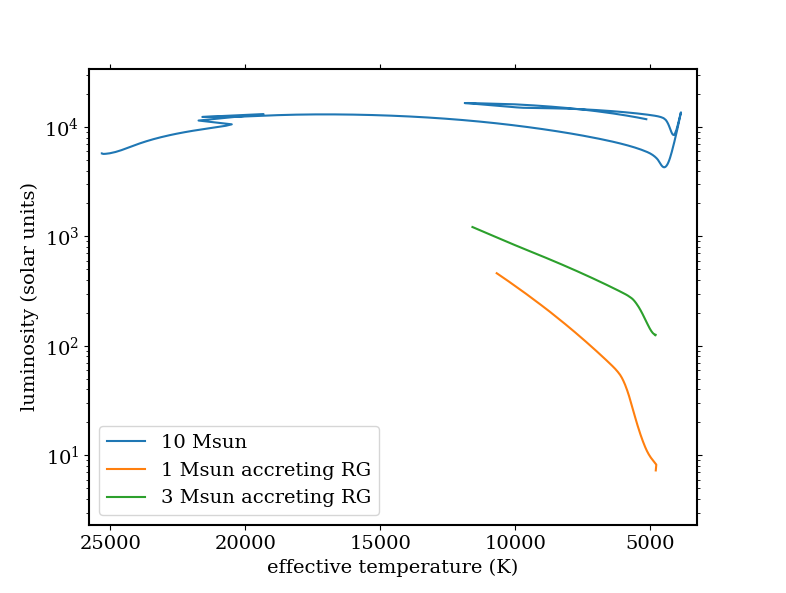 Not the answer you're looking for? Browse other questions tagged astrophysics stars stellar-physics stellar-evolution or ask your own question.

18
What happens to the neighboring star of a type Ia supernova?
3
Is there a way to tell what centile of the overall sample a star's mass is in?
32
What is the theoretical lower mass limit for a gravitationally stable neutron star?
5
According to the initial mass function, should there be more brown dwarfs than red dwarfs?
2
Why does the core of a low mass star contract after reaching electron degeneracy?
3
How can a low-mass star increase its mass to 1.4 Msun?
1
Why do neutron stars fed by another star not produce a second supernova like white dwarf supernovae?
8
What is the theoretical lower mass limit for a white dwarf?
2
Evolution of red dwarf stars
1
Understanding the Chandrasekhar limit for white dwarfs and its relation with supernovas