This is my bucket experiment. I use this experiment to explain lift. Am I right? 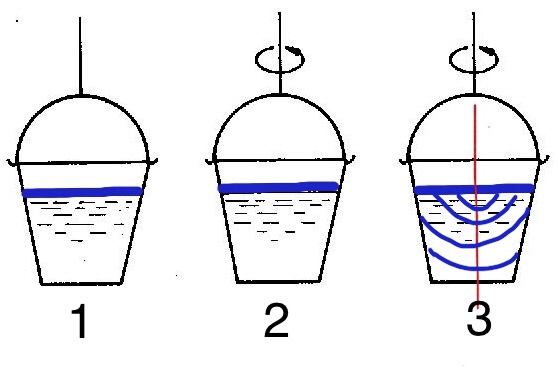 I use air instead of water, then fill the air into a bucket deep enough and large enough, and then rotate the bucket, the air in the bucket will form a parabolic surface. What does this mean?

Your explanation of lift is basically correct,low pressur above the wing and high pressure below produces lift,but I can't see what the bucket of water has to do with it. The situation in the bucket is that the water is trying to obey Newton's 1st Law of Motion, ie an object in uniform motion will continue to travel in a straight line until it is acted on by a force. The wall of the bucket exerts a force on the H2O molecules that 'want' to travel in a straight line so they deviate from a straight line and attempt to climb the wall which is in their way. Another way of describing the same thing is to say that centrifugal force generated by the rotation of the bucket and its contents forces the H2O molecules to move to the side of the bucket, which, because it is in their way, they attempt to climb. This makes the surface parabolic.

The water doesn't actually expand, it's just drawn away from the centre by the force which compels it to move to the side. If it were a very fragile bucket and the wall collapsed (assuming that this happened on the international space station so that gravity didn't take over), the water molecules would then obey Newton's 1st Law and travel in a straight line.

YES! You are correct.

Your analogy with the spinning bucket is extremely good, even though Chet M. and Michael W. do not see it. It correctly captures the conditions both below and above a wing. There is only one minor issue I describe below.

You often see people claiming that lift is due to the "turning" of air, which is correct, and this shows it perfectly.

The air above a wing is indeed trying to go straight (due to inertia - Newton's 1st Law) and, in effect, 'pulling away' from the surface just as it is trying to move away from the center of the bucket. This is centripetal acceleration of a fluid and for this to occur, the pressure must be less on the inside of the curved path than on the outside of the curved path. On the wing, the higher pressure is atmospheric pressure far above the wing. The curved flow is the cause of the reduction in pressure on a wing's upper surface...NOT Bernoulli.

FACT: A decrease in pressure is caused by the curved flow of the fluid in the bucket AND above a wing.

The air below a wing is also pushed into a downward curve in the very same way the bucket surface is forcing the water to follow its curved path. View a wing at a modest Angle of Attack. As a wing moves forward, the lower surface runs into the air and pushes it down, just like the bucket wall pushes the water away from its desires straight path, into a curved path downward. On a wing, the lower pressure is atmospheric pressure far below the wing.

Fact: The increase in pressure is due to the air and wing moving toward each other.

The minor Issue I mentioned above may cause some confusion to some readers. It is the fact that viewing a wing next to a top-down view of he bucked puts the pressure reduction above the wing, but in the center of the bucket. Then, the pressure increase is below the wing, but on the outside of the bucket (which may be viewed as being on top in the drawing). This can be viewed as upside down and difficult to resolve at first.

Very good Enbin, this is a very intuitive and correct analogy.

Also, the change in density for normal flight is so small that it can be ignored and has no significant contribution to lift.

Not the answer you're looking for? Browse other questions tagged newtonian-mechanics fluid-dynamics pressure bernoulli-equation lift or ask your own question.

7
How do simple bird waterers work?
1
How the wing creates lift? Why critical angle of attack is 16.5" for a supersonic jet and a kite?
5
What causes the air speed difference above and below the wing of a plane?
0
Where does the centripetal force come from? How to calculate?
2
Please explain airflows above and below aerofoils for a layman