Throwing something into orbit [duplicate]

is it possible with newtonian gravity to throw something (which has no on-board propulsion) so that it will orbit the earth without colliding with it(friction is not present)? my intuition tells me that no, because all closed newtonian orbits are periodic so that if I throw some thing it will eventually come back to earth. But I can't seem to show it with the math. Any help would be appreciated.

If you wish to throw an object to a circular orbit at a height above you, this is impossible. See here for the details.

If you want an elliptical orbit, then your observation that closed Newtonian orbits are periodic is correct. This is because a unique orbit can be defined by an orbital energy and a point on the orbit. By imparting a particular kinetic energy on the object at your location, you guarantee that the object will return to your location since it must be on the orbit you created.

Yes. You can absolutely do that in a Newtonian framework. In fact all the thoughts around the issue before Tsiolkovsky were based on the idea of launching projectiles with no on-board propulsion systems, it was him (two centruies after Newton) that started to point to rockets as a novel mean to reach orbital motion from Earth without extreme initial accelerations (thus saving the lives of any traveler inside the device).

Even Newton himself, explained what an orbit around Earth is in terms of shooting cannon balls from the top of a mountain! This is sometimes called Newton's cannonball and it appeares in the Principia Mathematica itself, the fundations of Classical Mechanics.

Newton's concept is that if you shoot a connonball from an elevation pointing to the horizon the projectile will fall to the ground after travelling several kilometers at best. But if your cannon is powerfull enought then your cannonball will never touch the ground. Why? Because as the cannonball falls to the ground it reaches such long distances that the ground itself get's farther from it because it bends under the curvature of the Earth. The cannonball is always falling but never reaches the ground since it is dodgin it and remains always far below it as it flies.

The Moon is doing the exact same thing, it is falling towards the Earth, but it never collides with it as the planet's surface bends below it's trajectory. This was the key idea presented by Newton. All knew that gravity existed before, but it was Newton that understanded that the Moon is falling just as an apple from a tree does.

You can also point your cannon perpendicular to the ground. In that case the projectile will return to Earth if it has a velocity below the escape velocity of the planet (which is around $11\; km/s$ on Earth). But if you have a powerfull cannon you can. It wouldn't be a closed orbit tho but it will never return to Earth. Gravity is a force that extends infinitely but it gets weaker very rapidly, so if your projectile slows down slower than that then you are always going faster than needed to escape the planet (even if the force never really dissapears).

The whole method was also depicted in literature when Jules Verne showed his idea of a large space cannon in "From the Earth to the Moon". 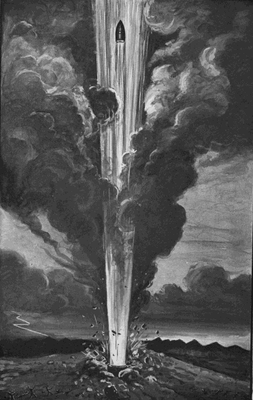 Although rockets are great in comparison to cannons for a number of reasons (rockets accelerate more gradually but cannons concentrate all the acceleration while you are speeding up in the barrel) the cannons have also been taken into consideration for launching compact unmanned probes into orbit easily. These so called space guns have been proposed and some have been built. The thing is that they have to shoot the object to large speeds because they need to get out of the atmosphere with still several kilometers per second speeds, the friction and intense accelerations involved make these projects difficult and the efficiency of rockets is nowadays imposible to overcome by these means. 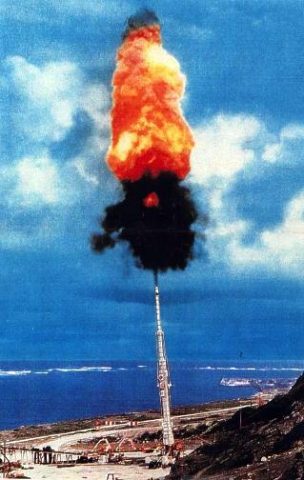 9
What exactly is the microgravity field in orbit?
3
How long will it take for a bullet to reach a Geostationary orbit?
0
Throwing a stone from a satellite toward an airless planet
1
Principle of launching satellites into orbit
2
Where does the energy come from that holds an orbit in place?
3
My question is about satellite motion and gravitation