Could the end cap of the Pascal B (1) survive its trip through the atmosphere?

Others believe it was vaporized by the intense pressure of traveling though the atmosphere at this speed.

No one ever reported it coming down anywhere...

Is there a physics / mathematical way to determine what happened to this steel plug?

Building off of akhmeteli's excellent answer, I implemented the differential equations from the asteroid webpage in Mathematica. I then tried to tweak the numbers, within realistic bounds, to get the thing into space. In no realistic case was I able to get the thing more than a few hundred meters up before it completely burned away.

To maximize the distance travelled, we want $\Lambda$ and $A$ to be as small as possible; respectively, these correspond to the rate at which heat is transferred to the "asteroid" and the effective cross-sectional area of the object (taking into account turbulence). In addition, we want the heat of ablation $\zeta$ (the amount of heat require to vaporize a certain mass of the substance) to be relatively high, since this will reduce the rate at which mass is lost.

The parameter $\Gamma$ also has an effect; it describes the amount of drag experienced with the atmosphere. Interestingly, one can actually get the projectile higher by increasing the drag: a higher drag means the projectile slows down faster, but that means that the projectile can slow down enough enough that it doesn't burn up immediately.

My optimistic estimates are $\Lambda \approx 0.15$ (note that this number is used in the code example on the page) and $A = 1$ (which would be more streamlined than a sphere). I also used $\zeta = 10\times 10^6$ J/kg, since it was the highest "typical" value in the table.1 Finally, I used $\Gamma = 0.5$, an estimate given on that webpage for the lower atmosphere.

Here's the result of the simulation, with the parameters given above. The vaporization of the plug is complete at a height of 312 meters. 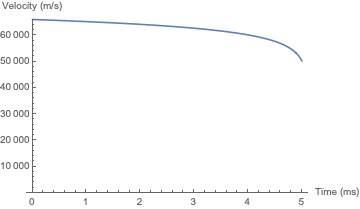 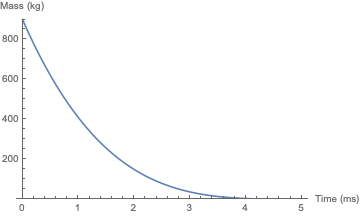 And here is the simulation for akhmeteli's parameters, with $\Gamma = 0.5$. The plug does not significantly change its velocity before it burns up; the final height is a little over 6 meters. As would be expected, this is within an order of magnitude of akhmeteli's back-of-the-envelope estimate. 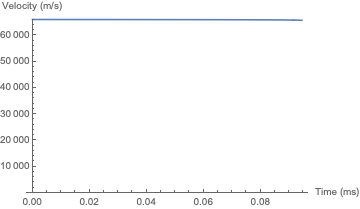 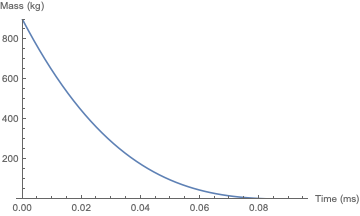 If you tweak the unknown parameters of my "optimistic" case above, you can attain a height of 1 km if:

All in all, it seems unlikely that the plug got anywhere near space.

Feel free to tweak this code as you see fit. The code stops integration when either the mass of the steel falls below 1 gram, or the speed falls below 1 m/s. The code does implement a height-dependent atmospheric density via a simple exponential model, though it turns out not to be all that relevant for realistic parameters. The acceleration due to gravity is assumed to be constant.

1 It is not clear to me whether these are the appropriate units for $\zeta$; the page is unclear. They're dimensionally correct, though.

See below the legend and the values I chose (SI units, compare with the values at the link):

The results of the calculation seem strange. It is possible that the formula in the link is incorrect, or maybe I made some mistake, so take this just as an initial attempt to make an estimate.

The drag equation stands that the an object travelling through the air receives a force of d*v^2*a*q, if the aerodynamic coefficient (q) was 1 and the air density 1.2 then the cap would have received a pressure of 4961 Megapascals, steel can't stand that pressure.

In my view, there is a very strong chance that the armored borehole cover ejected in the Pascal B (1) nuclear test did indeed survive Earth's atmosphere. And likely maintained enough velocity to escape the Sun as well. IMHO, though, much of the data related to this event is likely still classified nuclear weapons test research.

While physics do indeed enter into the borehole cover mystery equasion, they are not central to the issue. Metalurgy is IMO, what will make this borehole cover literally interstellar.

Some intriguing facts and variables remain:

IMO, universally overlooked variables, though, I believe might shed better light on the subject. No mention was made of the specific steel alloy used in the borehole cover. Which was reported to be an armor alloy. With some alloys, of course, much more durable and resistant to heat.

And remember, this was a cover designed to actually endure a small nuclear blast. Albeit at a reasonable distance from the epicenter. And otherwise protected by tons of an unknown (and possibly classified) concrete formulation. Among other aspects of this tests was to test containment structures. And the reason, as well, for the high speed, calibrated observational film camera.

Also noteworthy is the somewhat arbitrary values ordinarily given for aerodynamic stresses. An unstabilized armored disk is likely to seek the path of least resistance in the atmosphere. In that regard, the disk would have turned sideways, as a Frisbee flies. Or the disk would have folded in on itself from aerodynamic stress, and the effects of ablation softening the alloy. As this illustration of an Explosive Formed Projectile demonstrates:

0
Could a nanoscopic grain of tungsten moving at ludicrous speed make a sonic boom?