Can light beams (e.g. from a laser) visibly interfere if they cross in mid-air?

I am wondering if two or more specific (in terms of frequency, wavelength etc) light sources could exist and capable of transmitting visible or invisible 'light', and where the beams intersect each other, can have a visible (to the naked eye) indication of interference.

Obviously, this doesn't work with -for example- regular laser light. So I am looking if it is possible at all and if so, what kind of light is required.

*by mid-air I assume regular air as in our biosphere. 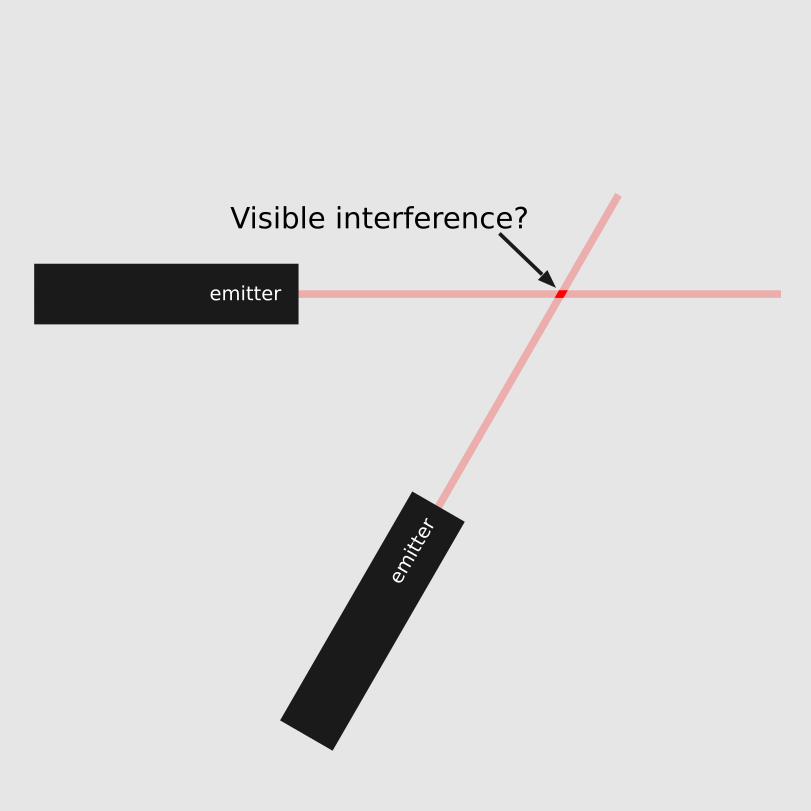 The word "interference" is often used for the patterns that result from waves adding up or cancelling each other when they are in or out of phase. Other answers to this question have mostly concentrated on something else: the possibility of one light wave changing the direction of another, which would only happen with very intense beams in air, and crazy-intense beams in vacuum. However, ordinary wave interference happens whenever two light waves overlap, so yes, this kind of interference does happen when two laser beams intersect. The only thing is, you won't detect it with human eyesight because the interference pattern is moving about too quickly, and the scale of the pattern is close to the wavelength of the light so our eyes cannot detect it without the aid of a microscope.

As I understand the question, you would like to know if interference fringes or other indications of interference can occur **in air* due to the intersection of two light beams. The answer is "yes".

In the link you provided, two beams intersect to provide a high-intensity region where the light power density is high enough to ionize air. This is not interference in the sense meant by optical physicists. However, under certain conditions a very similar experiment will produce interference. Specifically:

If all those conditions are met, then the power of the two beams can be tuned so that ionization occurs where the beam amplitudes add (where the phases are the same), but not where the beam amplitudes subtract (where the phases are 180 degrees different). In that case, photoemission will occur only in the regions where ionization occurs, which will be in the planes of constructive interference.

Note that ionization is not necessary: any nonlinearly intensity-dependent photo-absorption process will produce "mid-air" interference fringes which can in turn produce visible effects.

Short answer: Probably not, with minor uncertainty emanating from the vagueness of your term "mid air".

What would it take to accomplish this? As I said, extremely intense laser light, compressed into femtosecond pulses, might conceivably fit the bill in a sufficiently nonlinear medium. But air is almost certainly not that medium, so in practice, it's almost certainly not going to happen. Which brings us back to my short answer.

For "ordinary" lasers (visible light, milliwatt power) they will pass through one another with no fringing or other interactions.

For powerful lasers that have wavelengths where the air is heated by their passage, then they will interact indirectly, by heating up the air along their paths and at their point of intersection, thereby changing its refractive index.

At super-high energy levels, there are ways for the photons to interact more directly, as pointed out by Safesphere above.

Not the answer you're looking for? Browse other questions tagged visible-light waves laser or ask your own question.

4
Can 2 beams of ultraviolet light intersect and be visible where they intersect?
3
Can an invisible light source cast shadows?
8
Is manufacturing roughness really the only reason we don't see optical interference in thick dielectrics like windows?
6
At any given point in the universe, are there a huge number of photons crossing paths?
0
Interference patterns and visible light
2
Is there measurable heat at the point of contact with a material subject to light that is deliberately set up to interfere with itself?