Why does the additive color model use red, green and blue instead of yellow, green and violet?

Long cone cells in the human eye are most sensitive to 570-nm wavelengths which are more like spectral "yellow" than spectral "red" and short cone cells are more to 440-nm wavelengths which are more like spectral "violet" than spectral "blue" 1 2. Then why does the additive color model use red, green, blue instead of yellow, green and violet? Is it harder to make red by mixing spectral "yellow" and "violet" than it is to make yellow by mixing spectral "red" and "green"? Would a hypothetical "YGV" model allow for a wider or a narrower gamut than the RGB model? Even if it would allow for a wider one, would we be able to perceive such a gamut?

Let's try what you're proposing to do. I.e., take primary colors as follows:

What we get is shown in the picture below. The colored triangle here is the sRGB gamut. The black dot is the sRGB white point, and the dashed line is the border of the gamut you proposed. The coordinates are $u'$ and $v'$ chromaticity coordinates from the CIELUV color space. 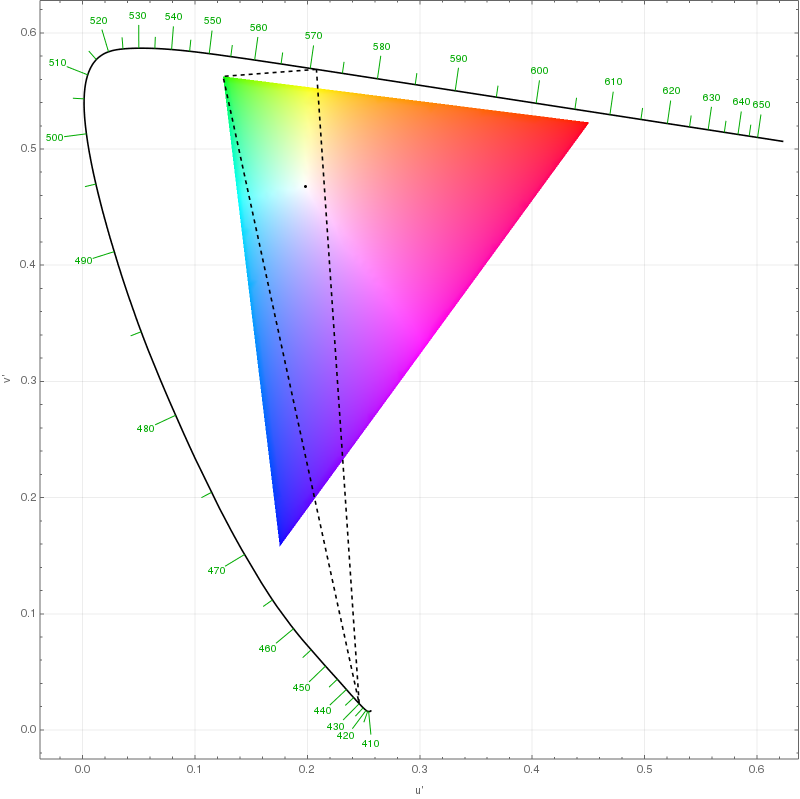 See that you've simply dropped the whole red part of the gamut. Notice also how much smaller in general your gamut is compared to sRGB, and sRGB isn't even able to represent all of the most common colors encountered in daily life (it isn't a superset of Pointer's gamut).

There's another shortcoming of your proposal: luminous efficacy of the primaries. While the yellow has no problem, violet has one. Luminous efficacy of sRGB blue (whose dominant wavelength is about 465 nm) is about 0.74, while that of violet 430 nm is about 0.12, which is about 7 times lower. This means you need to produce higher power to achieve the same luminosity of the primary, which results in higher power consumption, increased rate of degradation of some types of displays, and higher strain on the eyes.

It is very important to understand that there are a lot of color systems but you need an effective color system.

Color gamut means, that the effectiveness of a color system is best measured by the number of colors that can be created by mixing the primary colors. This set of the colors is the color gamut.

There are two main systems:

For an additive system, light is created directly (like a computer screen).

For a subtractive system, a certain reflected light is created by absorbing the opposite color (like in a newspaper). 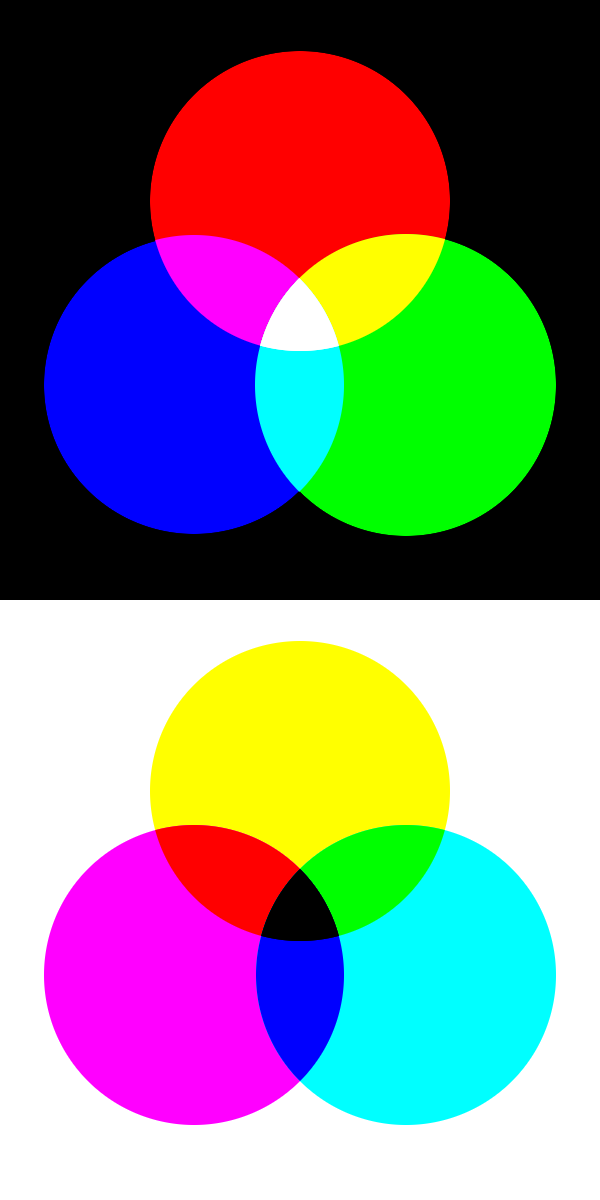 You are asking why we do not use yellow and the answer is that that would only work with subtractive systems (effectively).

You are suggesting a color mixing system that would use Yellow, Green, Violet, because as you say our eyes would be able to detect those colors (those wavelength photons) more effectively.

Now the human eye has an ability to detect mixed colors too, that is light made up of multiple wavelength photons, thus, with our cones, we are able to detect any mix of colors effectively, using multiple cones at the same time.

You are correct that we could calibrate the RGB system to a wavelength of what you suggest, (570nm, green, 440nm), instead of RGB, but that system would have some problems:

7
Why doesn't the Sun appear green to our eyes?
0
What are the "real" primary colors and complementary color pairs?
0
How does a yellow colour filter work in the sense of RGB colour model?
1
Order of coloured bands of light: red, blue, green, orange, red, violet, green, and violet