Can we arrange a practical in such a way that the dark and bright bands in diffraction grating be allowed to pass through the same slit to get the original light (i.e the incident light before diffraction), just like we reverse the arrows in reflection and refraction

Reversing diffraction is precisely what is done in Fourier Optics!

This is shown in the image below 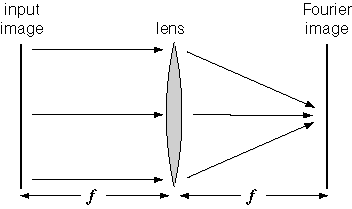 Optics is time-reversal invariant, so the short answer is "yes".

As a practical matter it is essentially impossible to set up the exact reversed situation, but we can set up good approximations in some cases (and in particular in electromagnetic bands not including visible light). Once the approximation is good enough it becomes useful.

A "phased array" transmitter is exactly a mechanism for focusing electromagnetic waves by emitting them from many places with carefully arranged phase off-sets. They are difficult to build, tune, and operate effectively; but they are a thing.

for light beams, you might also consider something called a corner reflector or retro-reflector. this is a glass prism cut in such a way that any beam of light entering it is reflected back at almost exactly the same angle that it made going into the prism. if you constructed a flat plate containing a large number of small corner reflectors and placed it at the location of the screen in the experiment you describe, then all the light striking the plate across its width would be reflected back to the slit.

I do not know how that collection of beams coming back into the slit would behave when they all meet!

In order to reverse the light in a double-slit interferometer to form a single beam, it is necessary to exactly time-reverse the light from the band pattern -- including the relative phase of each part of every band. This can be done, but it is not easy. Because a hologram records phase as well as amplitude, the method that will work best is to record the band pattern as a hologram, then reconstruct the hologram in reverse.

Not the answer you're looking for? Browse other questions tagged optics visible-light reflection refraction diffraction or ask your own question.